Upgrade to a new mobile phone and save: our guide to the best bargains

Need a new mobile phone? Grab a bargain before the end of financial year! 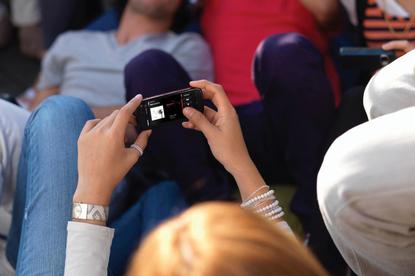 With the current financial year drawing nearer to a close, retail stores everywhere are proclaiming offering massive savings. Although most new mobile phones are sold as part of a contract plan, there are plenty of bargains and special deals popping up, allowing you to save on your phone bills and grab a hot new phone in the process.

We take the hard work out of nabbing a bargain with our roundup of 15 great mobile phone deals!

Despite being released in 2008, Nokia's E71 remains one of the most popular smartphones on the market, thanks to the combination of a stylish design and great features. The display is a little small, but the E71 features a fantastic keyboard and a stylish look that makes it appealing to business customers as well as regular consumers.

Nokia's first touch-screen mobile phone, the 5800 XpressMusic packs in plenty of features, and includes a free 12-month subscription to Nokia's Comes with Music service, allowing unlimited music downloads through the Nokia Music Store. Multimedia functionality is excellent, and it is aided by the inclusion of a 3.5mm headphone jack, FM radio and an 8GB microSD card.

The Bold is the best BlackBerry yet and has very few flaws. A refreshing interface, outstanding display and reasonable multimedia features are just some of what it has to offer. The navigational trackball and QWERTY keyboard are an excellent combination for data entry, and e-mail is as strong as ever.

Motorola's MOTOSURF A3100 is a Windows Mobile smartphone that is surprisingly intuitive to use. The screen is poor when compared to other phones and text entry will frustrate, but the TelstraOne Experience and Moto Homescreen skins make this a pleasant experience on the whole. Exclusive to Telstra, the MOTOSURF A3100 features a standard 3.5mm headphone jack, a 3-megapixel camera with flash, and has the A2DP Bluetooth profile for wireless audio streaming.

Hot deal: Telstra offers the Motorola MOTOSURF A3100 smartphone for $0 on a $60 phone plan over 24 months. A special online offer allows purchasers to receive $50 free credit with this deal, and Telstra also bundles a bonus MOTOSURF A3100 Premium Accessory Pack valued at $149.95 — the pack includes a Motorola H780 Bluetooth headset, a car charger and two styluses.

Samsung's F480T is a mid-range touch-screen phone that uses widgets and a customisable drag-and-drop interface. The F480T is attractive and comfortable to hold and its glossy, mirror-style finish certainly impresses. Text messaging is surprisingly efficient, and this phone packs in plenty of features as well, including full access to the Next G range of content and services (Mobile FOXTEL, BigPond TV and WhereIs Mobile amongst them), a 5-megapixel camera with autofocus and flash, an FM radio with RDS support and a music player.

Hot deal: The Samsung F480T can be purchased for $0 on a $40 phone plan over 24 months from Telstra. A special online offer allows purchasers to receive $50 free credit with this deal.

A feature-packed yet affordable 3G mobile phone, Sony Ericsson's C510 Cyber-shot boasts a 3.2-megapixel camera with sliding lens cover, a dual-LED flash and HSDPA connectivity. Although it doesn't wow with exciting new features, the C510 is great value for money.

Hot deal: You can grab yourself a bargain and get your hands on the C510 with Telstra for $0 on a $40 plan over 24 months. Once again, Telstra offers online customers $50 free credit with this deal.

The Samsung UltraTouch is a full touch-screen mobile phone that also features a physical slide-out keypad. This stylish slider phone is a great option for consumers who may be intrigued by touch-screen technology but aren't ready to throw away the familiar physical keys just yet. A great and amusing feature of the UltraTouch is Samsung's Fake Call application, helping you get out of awkward situations by simulating a phone call and playing back a pre-recorded voice message when answered.

Hot deal: The Samsung UltraTouch is available on the Vodafone network for $0 on a $69 cap over 24 months. People who purchase this deal online will receive a free digital photo frame.

LG's Arena is one of the hottest phones to launch in 2009, thanks to its unique S-Class 3D user interface. According to LG, the new interface is the result of more than two years of extensive consumer research. In addition to an all new look and feel under the hood, the Arena boasts HSDPA capabilities, extensive multimedia functions, Wi-Fi and built-in GPS. The amount of storage on offer is also impressive: 8GB of internal storage and a microSD card slot that supports cards of up to 32GB.

Hot deal: Vodafone offers the LG Arena for $0 on a $99 cap over 24 months. Online purchasers receive the first three months of the contract free of charge.

Sony Ericsson's W715 Walkman phone is a similar handset to the W705, with the exception of built-in GPS, Vodafone-exclusive branding, and the addition of the Wayfinder Navigator application. The W715 is a stylish slider with a 'galactic black' design. It offers access to the Vodafone Live! content portal and of course boasts excellent music capabilities thanks to the on-board Walkman software.

We couldn't possibly leave the most popular mobile phone out of a list like this. The iPhone will go down as a phone that changed the way consumers interact with portable devices. The superb combination of responsive touch screen, stylish design and the popular App Store has made this handset one of the most popular ever. With a major software update around the corner, the iPhone will only continue to go from strength to strength.

Hot deal: Optus currently has the best iPhone deal in Australia. An 8GB iPhone 3G will cost you $0 on a $49 cap over 24 months. This plan provides $300 worth of calls and text per month, and 250MB of data per month. Online buyers will also receive $50 of credit as a bonus.

HTC's Dream is the first Android-powered phone to hit the Australian market. It sports a slide-out QWERTY keyboard, a touch-screen interface and a trackball. The main attraction is obviously Google's Android interface — a great part of the interface is the notification and status bar. This drop-down screen is the best notification system we've seen on any mobile phone to date. The Android operating system is still in its infancy, but the potential for future upgrades and support is exciting.

The Nokia 3120 classic may not boast anything new or innovative, but an excellent design, an intuitive user interface and a reasonable features list make this a great choice. This phone is also a handy multimedia device, featuring video and music players, an FM radio and a two-megapixel camera.

Undoubtedly the best camera phone we've reviewed, LG's 8-megapixel Renoir is a superb handset. In addition to a responsive touch-screen interface, the Renoir is an impressive multimedia mobile phone, boasting Dolby Mobile sound, an FM radio and DviX/Xvid playback. LG's insistence on a proprietary headphone/charging jack is a shame, but Wi-Fi, built-in GPS and HSPDA capabilities make up for it.

Hot deal: It's hard to believe that you can grab the LG Renoir on Virgin Mobile for just $0 on a $29 cap over 24 months. Online purchasers will be pleased to know that $29 bonus credit will be applied on their bill within two weeks of activation.

Sony Ericsson's C902 is one of the more stylish candybar phones on the market, and even played a cameo role in the latest James Bond film, Quantum of Solace. It boasts a 5-megapixel camera with face-detection technology, autofocus and flash, with a unique sliding camera cover adding to the Cyber-shot experience.

Motorola's EM330 may be affordable, but if there is one thing the EM330 isn't, it's stylish. This mobile phone commands a ridiculously low price and is packed with plenty of multimedia features, headed by an MP3 player and an FM radio. Both these features work in tandem with the external display, which features touch-sensitive music controls that are displayed when the radio or music player is active.