Acer may be first with Android netbook 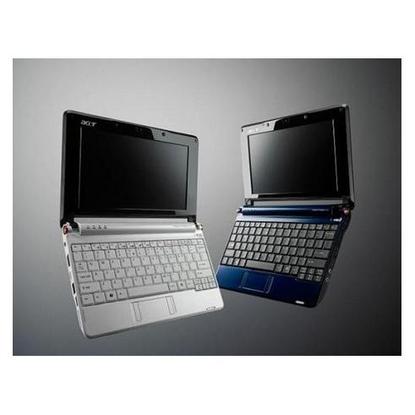 The Atom-equipped Acer Aspire One. Linpus Linux Lite and Windows XP are being offered as operating systems, with Android in the works.

Acer plans to launch a version of its Aspire One netbook with Google's Android mobile operating system in the third quarter of this year, a top executive at the company said Tuesday.

The device carries the same Intel Atom microprocessor as on any Aspire One, and it sports a 10-inch screen. A similar Aspire One is currently available from Acer but it comes with Microsoft Windows XP.

The device could be the first Android netbook available worldwide if Acer can beat some rivals, such as China's Guangzhou Skytone Transmission Technologies, which has said its Android netbook is undergoing final testing.

Android is a smartphone operating system developed by Google that is meant to make communications and Web browsing easy, especially on Google sites such as YouTube and Google Maps. The majority of netbooks today use Microsoft's Windows XP.

"We are seeing that Android is becoming more common," said Jim Wong, president of global product operations at Acer. Acer decided to move more quickly to work with Android because there is a strong development movement behind the software, he added.

The Aspire One netbooks Acer displayed at its news conference on Tuesday at Computex were running a dual-boot system allowing users to switch between Android and Windows XP, but Wong said the device that goes on sale later this year will only have Android and another Linux OS.

He declined to comment on pricing, saying only that it will likely be slightly less expensive than an Aspire One with Windows XP.

But he also said the device will not offer any additional power savings compared to an Aspire One with Windows XP. Companies showing other new Android-based netbooks at Computex have said the battery life will be much better.

The difference is the microprocessor. Acer is the first company to show an Android-based netbook with an Intel Atom microprocessor. Other companies have shown Android netbooks with chips from Qualcomm, Texas Instruments and Freescale Semiconductor that have ARM processing cores. These devices offer better power savings.

Acer worked with a Taiwanese Linux outfit called Insyde Software to port Android over to a netbook with an Atom microprocessor.

Running Android on the Aspire One took a lot of work, said an Acer representative, but they were able to modify the software because it's open source.