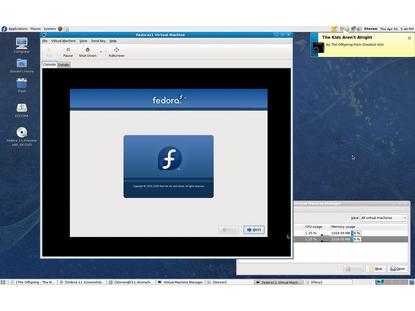 Fedora 11 running another installation of Fedora as a virtual machine

The virtualization features include improvements in the KVM stack that make it easier to maintain so developers can add features faster. The Fedora Project, which now has more than 29,000 community members, releases a new version of the free operating system every six months.

Fedora is a proving ground for new Linux technologies that often find their way into Red Hat's Enterprise Linux (RHEL). The Fedora release gives users a chance to test-drive the features.

And the operating system has an improved Virtual Machine Creation Wizard, which supports a wider variety of hardware and new workflow processes that makes it easier to deploy virtual machines (VM).

Fedora also has added security features to its virtualization technology including S-Vert, which is essentially Security-Enhanced (SE) Linux containment for virtual guests. The technology helps fine-tune administration over each VM.

"We have a long set of features, the broadest set we have had yet in a Fedora release," says Paul Frields, Fedora Project leader at Red Hat.

Fedora 11 also includes the Fedora Community Portal, which is designed to support real-time interaction among community members. The portal is built on a new framework called Moksha, which incorporates other frameworks such as TurboGears and Red Hat's AMQP stack.

The portal is initially for developers, but will expand in the next six to 12 months to include designers, documentation writers, translators and others working within the community.