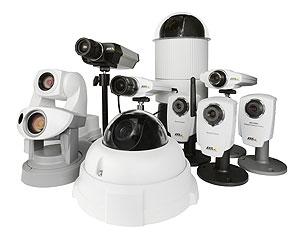 Axis Communications has announced the availability of over 30 new security camera products from the company in India and globally (in addition to about 200 existing products).

Functioning digitally over IP (internet protocol), these new cameras are touted to feature PoE (power over Ethernet), H.264 compression of high-definition video (for reduced bandwidth usage compared to the Motion JPEG or MPEG4 streams used until now), Wi-Fi connectivity (for securing perimeters), 2-way audio through integrated microphone/speaker functionality, LEDs (for lighting when requested by the user), and IR sensors (for detecting movement in the dark).

Compared to traditional analog CCTV systems, Axis Communications says that digital video surveillance systems are more scalable, more economical in the long run, offer intelligent monitoring, and are easier to setup (a single Ethernet cable is required for each camera, versus five cables for similar functionality on analog cameras). Digital cameras mean they can all be managed from a single console, and H.264 video compression means less space required to store video footage.

The business model of Axis Communications varies from its competitors, in that it does the research and owns its patents. But production is carried out by contractor-factories, and units are not sold to end-users directly. Instead, it sells its products to distributors and system-integrators, who then offer an integrated solution (including installation, maintenance, servers and storage to go with it, etc) to end-users, and can compete with each other to offer end-users the best value. According to Axis Communications, the majority of the video surveillance market is still using old analog products, thus they have the opportunity to improve their presence (of providing digital network video surveillance) tremendously, in Asia and globally.