Symantec has unveiled new technology that will be used in the latest version of its Internet security suite, Norton Internet Security 2010. 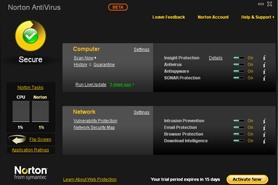 Norton Internet Security 2010 Beta is available to download now, with the full version expected to be released in October.

Symantec has unveiled new technology that will be used in the latest version of its Internet security suite, Norton Internet Security 2010. Claimed to be the "first major technology innovation in the security industry since signatures," Norton's reputation system tries to predict whether a file is "good or bad" based on statistical data collected by Symantec.

The reputation-based security features were detailed to members of the Australian and New Zealand press at a Symantec reviewers' workshop in Melbourne.

When Norton can't predict a definitive good or bad result, the reputation system provides the user with actionable data. Users can decide the course of action later, remove the file, or execute the file anyway. The system also shows how many other Norton users have this file and when a Norton user first saw the file.

Rowan Trollope, senior vice-president of Symantec's consumer business unit said reputation "doesn't replace any of Symantec's current technologies." "Reputation is about closing the gap. It's not a good or bad file because we don't know about it."

The reputation system is made possible by Norton's Community Watch program, whereby users anonymously contribute data to Symantec about the characteristics of applications running on their PCs.

Norton's Internet Security 2010 Beta is available now for download, with the final version set to be released in October.

Ross Catanzariti travelled to Melbourne as a guest of Symantec.