The BlackBerry Storm 2 phone is an overall improvement from its predecessor, but SureType still feels a bit unintuitive. 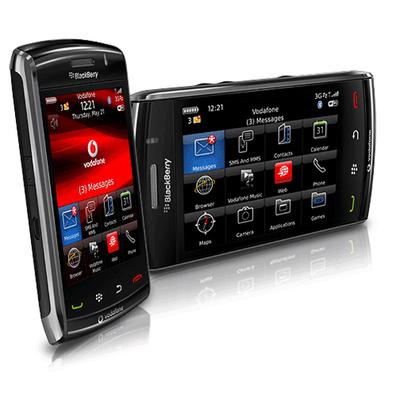 When the BlackBerry Storm debuted last fall, RIM's first touchscreen device received not-so-stellar reviews. RIM took reviewers' and customers' gripes into consideration, however, when designing the BlackBerry Storm 2 (US$200 with a two-year contract from Verizon; price as of 10/14/09). The result? This is the Storm that I wish RIM had released last year--the device's build, the on-screen keyboard, and the software are miles beyond the first generation. Even so, pressing to type still takes some getting used to.

In measurements and display size, the Storm 2 is identical to its predecessor. It weighs just slightly more (0.1 ounce more, to be exact) than the original Storm. If you put the two handsets side by side, however, the older Storm looks clunkier. All of the buttons on the Storm 2 are more recessed, making for a more streamlined design. Hardware buttons no longer run below the display; instead, the new handset offers touch-sensitive buttons there. And unlike with the first model, on this version you won't see a crack between where the display ends and the keys start--this alone puts the Storm 2 eons beyond the Storm in design aesthetics.

The absence of that (somewhat disturbing) crack is due to the new SurePress technology, which is now electronic rather than mechanical. You still have to push down to type or select an application, but the unit no longer feels wobbly or clumsy to press. As my colleague Yardena Arar noted in last year's review of the Storm, the mechanical SurePress interface was often inaccurate: You'd press one application, and another would activate.

Without getting too technical, the difference in the two generations lies underneath the display. The original Storm was essentially one big suspended button mounted below the screen's center point. Below the Storm 2's hood, in contrast, four activators sense when you're pressing on the screen. This design allows for a more stable navigating experience.

I had a much easier time typing on the Storm 2's keyboard than on the original's, but I still can't get accustomed to pushing down on a display to type. I know that it is supposed to feel more natural than a typical touch keyboard, but I think I prefer the physical BlackBerry keyboards. I do like how you can hold down the Shift key and a letter to capitalize it, as you would on a physical keyboard. A colleague with larger hands had more difficulty typing on it than I did, however.

One interesting thing to note: RIM studied the way people typed on touch keyboards, and found that, while typing quickly, they often briefly held down two keys at once. The Storm 2's keyboard mimics that by having both keys respond when you press them, thus making typing faster. And of course, the keyboard has RIM's excellent SureType predictive-text entry, which facilitates speedy typing.

The new Storm also has inertial scrolling, which means that you can move through your contacts or media library quickly with a flick of your finger. It isn't as speedy as the iPhone's scrolling, but it is a big improvement from that of the older Storm, which barely budged when you flicked to scroll. There were times when I had to flick multiple times to get the phone to respond, however. The cut/copy/paste functions are also easier to use, since the "handles" you grab to select text are bigger.

While the Storm 2 retains the original's 480-by-360-pixel display resolution, the user interface looks a lot brighter and sharper. This is due to the BlackBerry OS 5.0 software, which has sharper icons, brighter colors, and blacker blacks than does BlackBerry OS 4.7 (which shipped on the original Storm). The interface is clean and simple to navigate, thanks to the easy-to-identify icons.

Call quality over Verizon's 3G network was very good, with no background static or hiss. Voices were loud enough for me to hear easily, and they sounded natural. Parties on the other end of the line could hear my voice clearly while I was standing on a busy street corner.

Like all BlackBerry products, the Storm 2 has excellent messaging and e-mail capabilities. You get BlackBerry Enterprise Server support for your work e-mail, and you can load up to ten work or personal POP3 or IMAP accounts. The Storm 2 doesn't come loaded with the new BlackBerry Messenger 5.0, but you should definitely download it from BlackBerry App World. Trust me, you'll never go back to the old Messenger: Version 5 sports a spruced-up interface that's easier to use, it offers more emoticons to choose from, and it has the ability to display your location via GPS.

Pages loaded quickly over Verizon's 3G network, and even faster over Wi-Fi. Yes, the Storm 2 has Wi-Fi, and that alone makes the revised handset a big step up from the original Storm. RIM says to expect all of its future CDMA handsets to ship with Wi-Fi connectivity, so kudos to the company for finally getting past that roadblock. The browser will default to a mobile page when one is available, but it also loads full sites without any issues. Of course, the BlackBerry platform doesn't yet support Flash, so Flash-heavy sites won't load.

The music player displays album art and has easy-to-access touch controls. Audio quality sounded a bit hollow piped through the bundled headset and on my own higher-quality earbuds. Video playback was very smooth throughout most clips; I noticed only a bit of stuttering in fast-action scenes.

Overall, I was impressed with the Storm's 3.2-megapixel camera. Snapshots taken both indoors and outdoors looked better than pictures taken with the iPhone 3GS. Colors were a bit washed out and even more so when the flash was on, but details were sharp and I didn't detect any noise or graininess.

The BlackBerry Storm 2 is definitely an upgrade from the first Storm in design and usability. And while the keyboard handles better, I still can't really get the hang of it. Before you decide to purchase the Storm 2, try it out extensively in a Verizon store. If you discover that it isn't for you, consider getting a phone with both a touchscreen and a keyboard, like the LG enV Touch or the HTC Touch Pro 2. With one of those models, you get the best of both input technologies rather than something in between.