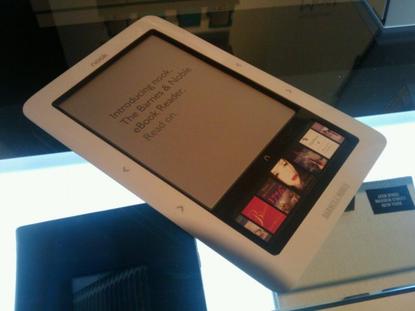 Priced at $259, the Nook will compete directly with the latest Kindle device from Amazon.com, according to the New York Times and other reports.

The Nook reportedly runs on the Android OS .

An official announcement from Barnes & Noble about the device was expected today, but had not been made as of 1 p.m. ET. The Gizmodo Web site has already posted leaked photos of the Nook, and said it has a dual screen.

That's similar to an Android e-reader called Alex, from Spring Design Inc. Alex, which features dual screens -- one for monochrome text displays and the other, in color, for Web browsing and to provide additional media to supplement the text -- was unveiled yesterday.

The Nook has a smaller secondary screen than Alex, however.

An important distinction for the Nook is that it will allow users to lend their digitized books to friends, according to the Times . It also downloads wirelessly, as the Kindle does via Sprint Nextel's network, and as the Reader Daily Edition from Sony will do when it goes on sale in December.

The e-reader market is further crowded by the iRex DR800SG from Irex Technologies, which is due out this month and uses the Verizon Wireless network.

Plastic Logic Ltd. is also planning an e-reader, and yesterday said it will unveil the QUE (pronounced Q), an e-reader for business professionals, at the Consumer Electronics Show on Jan. 7. It will be less than a third of an inch thick and measure 8.5 inches by 11 inches, but few details have been released.

Analyst firm iSuppli Corp. expects five million e-readers to be sold in 2009, although Codex Group expects that number to be less than four million. And iSuppli expects the number sold will exceed 13 million in 2010, given growing interest in the devices.

Barnes & Noble created an e-bookstore at BN.com in July, selling digital editions that can be read on BlackBerry, the iPhone, laptops and desktops. At International CTIA two weeks ago, the Motorola Cliq was shown with the ability to access BN.com to read digitized books, and representatives from the bookseller said then that they were seeking a broad variety of smartphones for users to access e-books.

But the Nook shows Barnes & Noble sees value in a specialized e-reader as well.

The Nook will reportedly be sold at Barnes & Noble stores and nook.com. The site was not live as of early afternoon.