Four ways to get stunning depth of field

Not sure what depth of field is all about?

Everyone loves photos with a sharply defined subject and a blurry, indistinct background. This powerful photographic effect has been used for ages--and it's shallow depth of field at work. Not sure what depth of field is all about? Check out "Master Your Camera's Depth of Field." This week, I've rounded up four ways for you to take control of the depth of field in your photos.

You probably already know that your camera controls exposure by balancing aperture size and shutter speed. You can combine a faster shutter speed with a bigger aperture, or a slower shutter with a smaller aperture. There's no single correct exposure setting for any photo; there are many, as long as you keep those two values in balance.

That knowledge is handy because it lets you control the depth of field by choosing the right aperture for a scene. The bigger the aperture (which corresponds to a smaller f/stop number), the more shallow your depth of field. The easiest way to do this is to set your camera to Aperture Priority, and then dial in the aperture value you want--the camera will automatically respond with the right shutter speed. 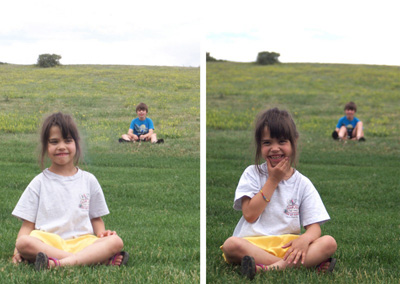 You can see the effect of varying the aperture in the side-by-side examples shown here. On the left, I used an aperture of f/16 to make the background relatively sharp. On the right, the larger opening afforded by an f/8 setting muted the background instead.

2. Fake It With Layers

Of course, this is the digital age: You can always fix a photo, as they say in the movie business, "in post."

Let's say that you want to blur the background of a photo. You can use layers to do that easily in Adobe Photoshop Elements or almost any other image editor. For a refresher, you might want to check out my recent tutorial on using layers in Photoshop Elements. 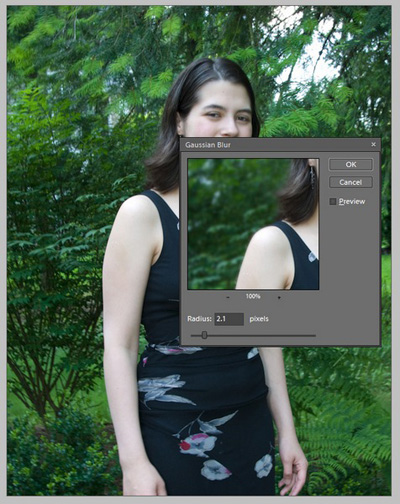 Here's the skinny on this technique: Open the photo in Photoshop Elements and choose Layer, Duplicate Layer. Then, with the top layer selected, choose Filter, Blue, Gaussian Blur, and apply some blur to the image. You can apply more if you want to; you can do it more than once, like putting layers of wax on your car.

When the background looks sufficiently blurry, choose the Eraser tool from the toolbar on the left side of the screen, and erase the now-blurry subject, revealing the sharp original from the layer underneath. For the best results, select a brush shape with a soft edge from the drop-down menu in the options palette at the top of the screen.

3. Fake It With Selections

There are many ways to blur your background in Photoshop Elements. Another approach is to select the subject using a selection tool like the Magnetic Lasso, and then choose Select, Inverse from the menu to select the background instead. Then apply blur to the selected region, leaving the subject sharp and clear.

4. Get Infinite Depth of Field

Sometimes you want a deep depth of field, not the shallow depth that blurring the background gives you. A while back, I found a clever way to get that effect: a program called Helicon Focus.

Helicon works sort of like a panoramic stitching program in that it combines multiple photos into a single, finished image. But instead of a series of overlapping shots, Helicon requires a series of shots of the exact same scene, just varying where the focus is from front to back. The program combines these images into a final photo that is in sharp focus all the way from the foreground to the background. Intrigued? Check out my tutorial on how to use Helicon Focus.