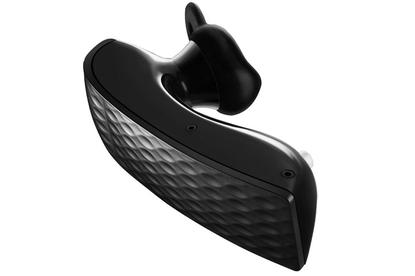 Previously only available in the US, France, Germany, Norway and Canada, the Jawbone Prime Bluetooth headset is widely regarded as one of the best on the market thanks to its "NoiseAssassin" technology. According to Aliph, the patented NoiseAssassin technology was originally developed for use by the US military.

The Jawbone Prime uses a Voice Activity Sensor (VAS) to distinguish the sound of your voice from ambient noise, and then uses digital signal processing (DSP) to remove the noise. A form of bone conduction, the VAS is a small plastic bulb that sits against your jaw and detects the frequencies of your voice.

At the launch, Aliph sales director Serge Kossi demonstrated the Jawbone Prime Bluetooth headset by holding a mobile phone conversation while standing next to a running blender, and then next to an iPod speaker dock blaring loud music. A similar demo at a construction site can be seen on Aliph's Web site.