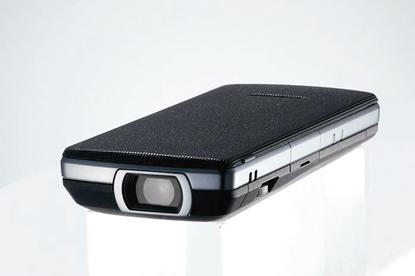 Fujitsu is breaking new ground in the cell phone market with the imminent introduction of a cell phone that splits into two parts.

The F-04B was announced this week as part of NTT DoCoMo's new line-up and is scheduled to hit Japanese shelves in March or April next year. At first glance it looks like a conventional slider cell phone: grab onto the bottom of the phone and a numeric keypad slides out. But decouple a catch and the entire back half of the phone can be pulled off.

The top half contains a 3.4-inch touchscreen display and most of the electronics needed for the handset to function. The radio module and antenna is also in this part. The back half has a QWERTY keyboard and the slide-out numeric keypad. The two halves stay in contact via Bluetooth up to a distance of about 10 meters, said Fujitsu.

On its own the top half of the cell phone is fully functional thanks to the touchscreen display so users looking to sometimes lighten their phone can just snap off the back half and leave that at home.

But when kept together some novel usage scenarios can be realized.

This could be an advantage for people who worry about potential health problems from keeping a cell phone near the head -- the top half with the phone can be kept in a bag and calls made and received using the lower half of the phone in essentially the same way as a Bluetooth headset works.

Calls can also be dialled via either half although the bottom half with the keyboard lacks a display to assure users that they are entering the right number.

If using the keyboard half of the phone to make or receive a call it's possible to use the top half of the display to, for example, check e-mail or take a picture.

Full details of the handset are yet to be announced but NTT DoCoMo said it measures 11.4 centimeters by 5.1cms by 20.4cms and weighs 173 grams. Standby time is 600 hours in WCDMA mode and 400 hours in GSM mode while talk time is 300 minutes and 330 minutes respectively.

The screen resolution is 480 pixels by 960 pixels, it has a bilingual (Japanese and English) interface, built-in Felica contactless smartcard and the camera has an impressive 12.2 megapixel resolution. Other features include GPS and HSDPA (high-speed downlink packet access) high-speed data downloads.

Fujitsu also plans to offer an optional projector unit that can be clipped onto the bottom of the phone in place of the keyboard to project images on a nearby flat surface.

There are no plans to put the phone on sale overseas.