It's That Time of Year again, and even if you don't celebrate The Holidays, chances are you have other people in your life who do. 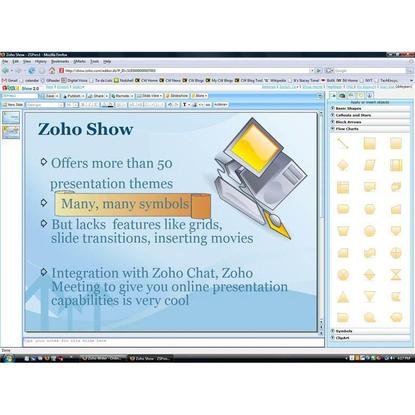 Zoho offers the widest variety of presentation design templates (about 50), and the most useful clip art and symbol collections.

It's That Time of Year again, and even if you don't celebrate The Holidays, chances are you have other people in your life who do. There's so much to get done as the end of year approaches, it can be hard to keep track of it all. And while paper might work for your own holiday wish list, these free Web apps can help organize the rest.

Planning a big dinner? If you're just having a couple of people over there won't be much problem tracking who's coming and who's not. But if you're having a big group over, electronic invitations can be quite handy.

Unless you and your guests are all under 25, odds are everyone isn't on Facebook, in which case you'll need an online invitation service. Having heard good things about Socializr, I used it to send out invitations for an open house last autumn, and it worked great. You can design your own electronic invitation and decide whether or not invitees can see the guest list or invite more people. And people who just want to send a simple response don't need to sign up for the site.

If you're cooking the big meal (or just bringing over multiple dishes to your host) and don't plan to make the same old favorites, some recipe-tracking help is in order. In my case, I've got a shelf of cookbooks, a stack of magazine clippings and a hand-written recipe notebook, making it tough to quickly zero in on a new cranberry relish recipe or that wild rice recipe I made 3 years ago that everyone liked.

OK, geek confession: Actually, I can find recipes I've already made before, since I hand-coded a recipe database years ago. Since then I've entered most things I've cooked that I think I'll want to make again. But that app doesn't scale to collecting all the recipes I come across that I might want to try someday.

Enter Evernote, the clipping/note-jotting service that runs on your desktop as well as in the cloud. Now as I'm leafing through cookbooks or magazines looking for Thanksgiving weekend inspiration, if I find something interesting, I jot it down in my Evernote "recipes" notebook and tag it "Thanksgiving." Typing in the entire recipe would be a drag, but I do enter key ingredients and a little about preparation and cooking time, as well as where to find the complete recipe.

Or I could scan the page -- Evernote does text recognition within images. Or, if the item is from a magazine with a robust Web site, I search for the article online and then use Evernote's Web-clipping tool within my browser.

Evernote also has a mobile version, which means I can pull up recipes (and ingredients) if I've stopped unexpectedly at the grocery store.

Hat tip to Computerworld reviews editor Barbara Krasnoff, whosewrite-up inspired me to give the service a test drive.

If you want a Web application that's specifically geared toward recipes, several cooking magazine sites offer that kind of functionality. For example,MyRecipes.com not only aggregates recipes from several magazines like Cooking Light and Southern Living, but also offers the option of storing your own recipes as well.

The advantage is a specific structure for recipes and recipe categories (as opposed to remembering which tags to use in Evernote) as well as easy integration and search with a large database of already published dishes. The disadvantage is that the structure for entering your own recipes can discourage you from entering a lot of your own items. Plus, your information exists only in their cloud, whereas Evernote syncs with the desktop and entries can be exported.

Card writing. Gift buying. Gift shipping. Holiday dinners and other gatherings. Whether Christmas, Chanukah, Kwanzaa, New Year's, all of them or others, end-of-year holidays generally mean a stack of competing tasks that can tax a simple to-do list. This time of year, it's time to pull out the big gun in your organizational arsenal: project management.

Yes, project management -- but not some cumbersome, complex desktop app. This year I'm entering all my "milestones" and associated "to-do" lists into Basecamp, the lightweight Web project management tool that spawned the popular Ruby on Rails development framework.

Basecamp offers a free one-project account that lets you add milestones, associate to-do lists with each milestone and assign a to-do task to anyone in your account. (Adding people is also free.) There's a message section that lets you send out e-mail notes but also keep each message collected on the site.

You need a paid account in order to upload and share files within Basecamp, but a free whiteboard included in all accounts allows you to have links to external files (such as a spreadsheet or text document, which you could easily store and share using something like Google Docs).

I long found Basecamp frustrating because while the "milestones" had due dates, the to-do items didn't; which meant if I wanted e-mail reminders or a way to look at tasks by date, I needed to make them milestones and not simple tasks. And that somewhat defeated the purpose of organizing work within a project management tool. However, Basecamp just added dates to its to-do lists this week, and the developers say those will soon be appearing on the overall dashboard calendar as well.

Finally, there are the card and gift lists. I typically extract my annual card-mailing list from my overall database of family and friend addresses, and I keep my gift list in <shame>a looseleaf binder</shame>.

The card list has its flaws -- most notably that I just tag names to print out various mailing label groups (overseas, domestic) instead of keeping separate lists, and I invariably either forget a few people (not everyone in the database gets a card, since the database comes from my phone, and as much as I like the local pizza place, I'm not mailing them holiday greetings) or print up the wrong labels for the wrong people (for example, using the domestic address format for friends in Europe).

This year, though, I'm looking to organize it all in a database, so I can easily tag people for the right format and export the information properly.

My gift list is also moving to an online database. The plan is to tag people by holiday and location, so it'll be easy to see which gifts need to be purchased and shipped by what dates. That's still in the works, which will give me something to put on my Basecamp holiday to-do list for the Thanksgiving weekend.

I'm putting it all in a Zoho Creator database, the same app we use here at Computerworld for our database of product reviews. I could keep it all in an online spreadsheet, but the database offers additional flexibility for searching, sorting and filtering by multiple criteria.

I also like Zoho for its ease of development (drag-and-drop form creation, for instance); plus, you can export your data in multiple formats, and it runs on mobile devices. I expect mobile access to be useful not only for when I'm out at the stores trying to remember what to buy, but also throughout the coming year, since I jot down gift ideas whenever they come to me, not just in autumn.

A free Zoho Creator account will give you two users (you and someone else), three apps and up to 1,000 records, which should be plenty for most people's personal card and gift lists.