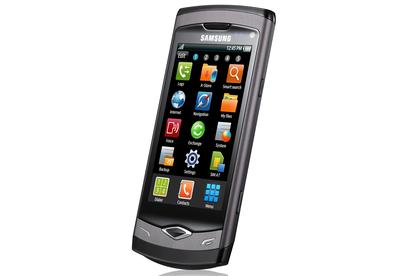 Samsung is hoping a "Super-AMOLED" capacitive touchscreen will set the GT-S8500 Wave, the company's first smartphone based on its own Bada platform, apart from the competition, it said on Sunday. But analysts are questioning if the platform will be able to attract developers as well.

The Super-AMOLED (Active-Matrix Organic Light-Emitting Diode) technology offers better brightness than traditional AMOLED displays and will, for example, perform better in sunlight, according to Samsung. The screen measures 3.3-inches and has a 480 x 800 pixel resolution. It also uses tempered glass for better durability and an anti-smudge coating, Samsung said. The display looks "stunning," market research company CCS Insight said in a research note.

The Wave also supports video recording at 720p, a 5-megapixel camera with LED flash and A-GPS (Assisted-GPS). It can access the Web using HSDPA (High-Speed Downlink Packet Access) at 3.6M bps or the 802.11n standard. The phone features the new Bluetooth 3.0 standard, as well.

The user interface is based on TouchWiz 3.0, which lets users customize a number of different home screens with different widgets. Users can also swipe their fingers to the right on a contact to call a person or to the left to send them a message. There is also integrated support for Twitter and Facebook in the phone book.

All this is powered by a 1GHz processor, which Samsung developed by itself, and comes in an aluminium body that's 10.9 millimeters thick.

Samsung's Bada platform was introduced in November and opens up Samsung's proprietary smartphones to developers, and will, according to Samsung, also help bring down the cost of smartphones to more affordable levels.

The S8500 Wave will cost €320 (US$436), but the aluminum body makes it look as expensive as any other smartphone bought without discounts or rebates.

However, the success of Apple's App Store means that good hardware and price aren't enough these days. The availability of cool applications has also become a factor, and Samsung is aware of that. The Bada application store will have about 200 apps at the time of launch, according to Samsung.

The company hopes the fact that it sold approximately 40 million touchscreen phones in 2009 -- and expects to sell even more this year, with a large portion of those using Bada -- will be enough to convince more people to start developing applications.

However, not everyone is sure Samsung will be successful.

"It will struggle to rival the volume of devices with Android or Symbian," said Geoff Blaber, analyst at CCS Insight.

"The concern I have is if Samsung has the know-how to handle a developer community," said Carolina Milanesi, research director at Gartner.

There is also the question why Samsung has decided to launch another platform into an already crowded space. Keeping Bada in-house gives Samsung total control over what goes into the platform, and is also a way for Samsung to try to differentiate its products from the competition, according to Milanesi.

The Wave will start shipping in April in Europe, and then in most other parts of the world in May. However, availability in the U.S. is still "under discussion," according to Samsung.