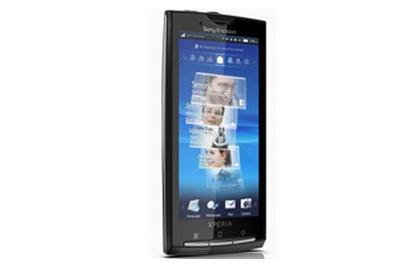 Sony Ericsson on Sunday introduced three new phones at the Mobile World Congress in Barcelona, Spain. The Vivaz Pro, running on the Symbian platform, and the X10 Mini and X10 Mini Pro, running on Google Android, together with the previously announced X10 and Vivaz model, are dubbed as the "fabulous five" by the company.

Unlike the Xperia X10 Mini, the X10 Mini Pro features a full slide-out QWERTY keyboard and is slightly larger and heavier. Don't expect the latest and the greatest version of Google Android on these phones just yet, as they come only with the 1.6 version.

To make up for the older software delivered with these phones, Sony Ericcson developed the Timescape interface for Android, which brings together on the home screen status updates from Facebook, Twiter messages and replies, incoming text and picture messages, and missed calls.

The 3G phones also come only with 128MB of internal memory (expandable up to 16GB via microSd cards), a problem plaguing most Google Android phones, The Xperia X10 mini and X10 pro are expected sometime in Q2, for a yet-unannounced price.

Also announced on Sunday was the Sony Ericsson Vivaz Pro, which adds a QWERTY keyboard to the previous touchscreen-only offering announced in January. The Vivaz Pro runs on the Symbian platform from Nokia and features a 3.2-inch display (360 by 640 pixels) in a 16:9 aspect ratio.

Sony Ericsson's Vivaz Pro comes with an 8GB microSD card included (75MB internal memory), expandable up to 16GB. The 3G phone is expected to arrive in the second quarter as well, again at pricing to be announced.