Else, an Israeli technology company, has designed a smartphone that can be operated with one hand 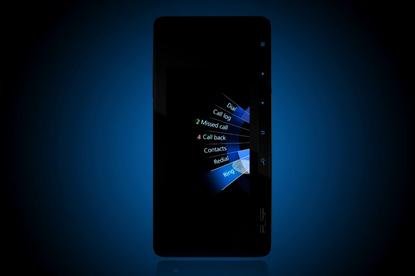 Today's smartphones are too much of a handful, according to Israeli company Else: You either need to grab them with both hands and punch away at the keyboard with your thumbs, or you hold them with one hand and touch the screen with the other.

However, Else's Intuition software platform makes it possible to access all the functions, contacts and data in a phone with just one hand.

The company is demonstrating the software on a prototype touch-screen phone, the First Else, at Mobile World Congress, and Else CEO Amir Kupervas hopes to have the phone on the market around the middle of the year.

Intuition eschews the usual grid pattern of buttons, icons or tiles in favor of a fan. On the default screen, blue wedges labelled "Phone", "Diary" and "Media," are splayed out conveniently under your thumb: Push one, and it unfurls to reveal more options. Diary includes appointments and e-mail messages -- the subject lines splay out across the screen -- while the Phone section includes a fan of speed-dial numbers and a more detailed address book.

Other smartphone interfaces put too much emphasis on the phone element, according to Kupervas: if someone calls you while you're shooting a video, say, other phones force you to accept or reject the call before you can continue. Intuition, he said, will warn you more discreetly of the incoming call with an icon in the corner of the screen.

Else has built its Intuition interface on top of the Access Linux Platform from Access, the Japanese company that bought the Palm OS software division PalmSource, and turned to another Japanese company, Sharp, for the hardware.

All that is contained in a sleek black slab with an 854- by 480-pixel touch-screen display filling most of the front. The touch-sensitive panel extends to the edge of the phone, where dedicated areas for up, down, search, back and home can be found, and to the top, where a small auxiliary display shows the time, messages waiting, signal strength and battery level. Tapping one of these four areas will bring up related functions on the main display, which can thus be turned off most of the time to save power.

Power management is one of the challenges Else still faces. Kupervas avoided questions about the phone's battery life, saying only that it will be competitive with that of other smartphones on the market when it launches. Other staff said that engineers are still optimizing the phone's software, notably to power down parts of the phone's hardware when they are not being used, with the screen and the main processor among the most energy-hungry at the moment.

Another limitation will only be encountered by lefthanders: while the fan of options can be flipped to appear on the left, the dedicated buttons for search and so on will remain on the right, making them much harder to reach. It's not economical to ship a separate model for left-handers, Kupervas said.

The First Else phone has no slot for additional memory cards: if you need more storage you can keep your files "in the cloud," said Kupervas. That highlights another aspect of the phone: the close ties between its software and Else's online services.

"The device is always interacting with our server farm," Kupervas said. Those servers will offer online backup of the phone's information, additional storage, visual voicemail and, he said, "A music store with over 4 million tracks." The servers will also enrich the phone's search function. Type a word in the search box on the phone, and it will scour its internal memory for matching contacts, events or files -- and then ask the servers for other matches from the Web, mapping services or the music store.

Because of those links with online services, you won't be able to buy the phone just anywhere: Else plans to sell it through network operators that also license its server software.

"The business model is based on working with carriers: It's not an open market device," Kupervas said. "We're in advanced discussions with two operators," he said. The phone will be ready by the beginning of the second quarter, and after that it will be up to the operator partners whether it goes on sale in the second or third quarter, he said.