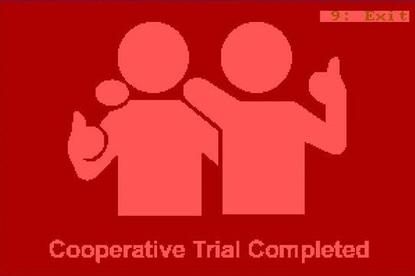 With the insane new content that has spawned from Portal in the past few days, it's not very surprising to find out that Portal 2 is, in fact, a real game being created. That much was set in stone when Game Informer announced the sequel as its next cover story. When combined with the GameStop Portal 2 product page, here's what we've been able to deduce regarding the game today.

The game will include a co-op campaign, and "two new player characters." Game Informer's cover tag states "Aperture Science returns for the people who are still alive," while the extended ending mentions a "party escort submission position." It looks as though we'll be getting to know a few characters of the flesh-and-bone variety this time.

The game will mix the serenely disturbing test areas Aperture Science laboratory, while including more overrun areas, if the two sides of Game Informer's cover are to be believed. We can see a cube in the cover art, and while we can't make out the markings on it, it looks a lot like our favorite eight-sided pariah.

Even though Portal 2 is official, Valve isn't done messing with its fans' heads. While the company issued a very brief release today regarding the game, a hidden message was planted in the text.

Steam forum members quickly decoded the underlined parts of the message to discover a password combination that produced a set of images, adding even more intrigue to Portal 2's multiplayer.

Today's developments have made three things very clear -- Portal 2 is coming, Valve isn't done messing with our heads, and the fans are ready for whatever mysteries are thrown at them.