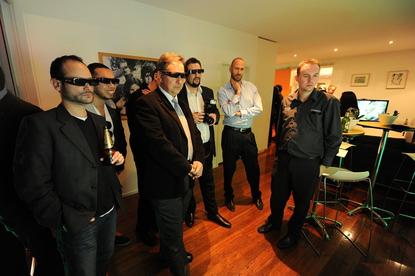 Guests check out a selection of Sony's 3D wares at Rose Bay, Sydney.

Sony Australia has unveiled a new range of 3D-capable products at an exclusive event held in the Rose Bay area of Sydney. The invitees were treated to a hands-on preview of Sony’s 2010 3D entertainment line-up, including Bravia 3D TVs, 3D Blu-ray players and 3D PlayStation games.

Sony Managing Director for Australia and New Zealand, Carl Rose, announced that a shipment of its Bravia 3D TVs will be rushed into Australia in time for the 2010 FIFA World Cup. The shipment will arrive in Australia ahead of schedule following “unprecedented demand”, with more stock to follow in July.

“Not since colour TV hit our shores has there been such enthusiasm for a home entertainment technology,” claimed Rove. “I’ve certainly never seen anything like it in my 25 years in the industry.”

Sony’s 3D range is set to include BRAVIA TVs, Blu-ray players and home theatre systems, as well as NEX-3 and NEX-5 interchangeable lens cameras. The new NEX camera range will be capable of capturing 3D Sweep Panorama images that can be viewed on a compatible 3D TV.

"We have invested heavily in development to make sure that we launched at a time that would provide Australians with the best 3D viewing experience possible,” concluded Rove.