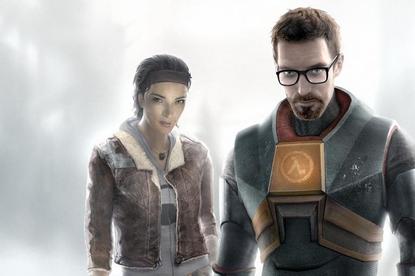 Half-Life 2: Episode 3 will not be debuting at E3

No, digital distribution maven and Half-Life publisher Valve won't be unfurling Half-Life 2: Episode 3 at its zombie-press-infested games booth during next week's E3 trade show. That's straight from the computer of Valve's own managing director Gabe Newell, who, if we assume this Gmail screen capture is authentic, answered a fan request for confirmation of either Episode 3 or Left 4 Dead 3 at E3 next week with four simple worlds:

The folks at fan-site HalfLife2.net followed up with Newell, asking about a mysterious image that sprang up in recent days. The image, set against a black backdrop, shows the lowercase Greek letter lambda -- appropriated by Valve as their logo for the Half-Life games -- with the words "Freeman" and "June 14th" below. Newell's response?

Valve's been teasing fans and press alike in recent days. We received an email last week announcement the cancellation of a June 14 "Portal 2" event. Portal 2 -- announced in March -- would be the (presumable) sequel to Portal, Valve's topsy-turvy first-person Euclidean geometry-bender. In the email, that event was "replaced by a surprise."

Other things that (probably) aren't the surprise: Half-Life 3, Left 4 Dead 3, Steam 2: Steamier, or Valve changing its name to Stopcock.