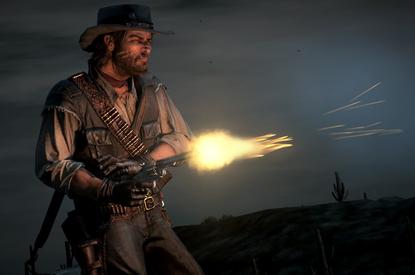 The slightly-delayed May 2010 sales figures have finally landed, and as expected, Red Dead Redemption took the top sales slot, with the debuts of Mario Galaxy 2 and the second yearly iteration of THQs UFC franchise landing slightly below.

It was a strong month for game debuts, as seven of the top 10 titles were new releases, with Pokemon SoulSilver holding on tight to make the list for a third straight month. The two versions of Red Dead combined for over 1.5 million units sold (surpassing lifetime sales for its predecessor Red Dead Revolver), while the two UFC releases totaled slightly over 400,000 units in sales. That number that falls far short of the million-plus sales of UFC Undisputed 2009 in its debut month a year ago, though some of the drop-off can be attributed to this year's MMA game having only one week to accumulate sales in its debut month instead of two. The other two titles were long-tail Wii mega-hits Wii Fit and New Super Mario Bros. Wii. Here's how the monthly rankings played out.

The console rankings remained the same for the second straight month, though the DS' unit sales dropped, bringing the Wii within 50,000 units in sales. The PSP saw another slight drop, with sales dropping under 60,000. Here's how the hardware wars ended in May.

While June lacked the high-profile releases of May, the announcements of E3 concerning the 3DS and the PSP's new marketing campaign should make the next report interesting. If the NPD gets back on its normal schedule, look for it in roughly two weeks time.