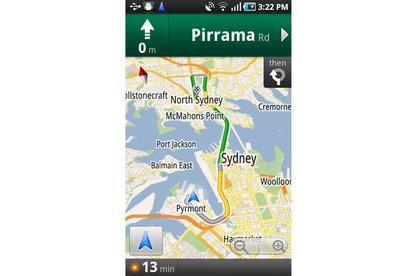 Initially launched in November 2009 in the US and then April 2010 in the UK, Google Maps Navigation is a free service that uses a phone or tablet Internet connection to access Google Maps and related information. The service provides full driving and walking turn-by-turn navigation with voice guidance, Street View and 3D map options, along with the ability to search for locations by voice.

Users can also search for businesses or points of interests along a route, look at Street View imagery, and add direct driving or walking shortcuts to the home screen of their smartphone.

Google product manager for Maps, Andrew Foster, said the “always connected” nature of current smartphones made it an ideal platform to launch these types of services.

"Globally mobile is exploding, there are now five billion mobile devices compared to five million a decade ago. Smartphones are as powerful as desktop computers were recently", he said.

Foster confirmed there are currently no plans to launch Google Maps Navigation Beta for the iPhone or BlackBerry platforms.