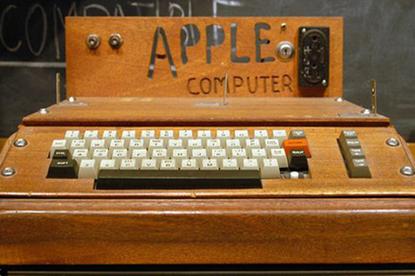 Two hundred Apple-1 computers are estimated to have been created and sold for $666.66 before Apple Computer Inc. was founded in 1977. Once the Apple II, the company's first official product, was released, many of the Apple-1 models were reclaimed as trade-ins. Only about 50 are still known to exist, many of them indexed by hardware developer Mike Willegal.

The winner of the Christie's auction was not identified.

The original Apple-1 was sold as a fully assembled circuit board with 4KB of memory but no case, power supply, keyboard or monitor. Christie's Apple-1 included the machine's original packaging, manuals, cassette interface and basic tape, documentation and a letter from Steve Jobs, but some parts may not have been original, said computer hobbyist and retrocomputing expert Eric Rucker.

"The CPU is a Rockwell plastic part, not a MOS [6502] white ceramic part," he noted, identifying what Christie's item description called "a few slightly later additions."

Apple-1 inventor and Apple co-founder Steve Wozniak was on hand for the auction, according to the Wall Street Journal.