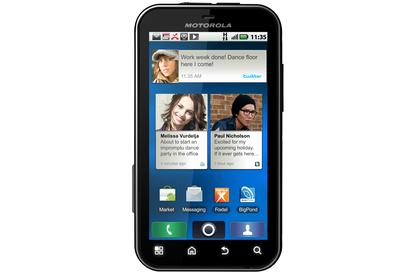 The Motorola Defy is water, dust and scratch resistant and will be available through Telstra from 30 November.

Motorola will release the first ruggedised Android smartphone, the Motorola Defy, in Australia on 30 November.

Check out our guide to other top Motorola phones.

The Motorola Defy is water-, dust- and scratch-resistant. The company describes it as “Australia’s first summer-proof smartphone”. It will be sold exclusively through Telstra for three months from 30 November and is rated as a BlueTick phone, meaning it provides superior handheld coverage in regional and rural areas of Australia.

Ruggedised mobiles have traditionally been for low-end feature phones rather than fully fledged smartphones.

The Motorola Defy runs the 2.1 version of Google’s Android platform and it has a 5-megapixel camera with single LED flash and a 3.7in capacitive touchscreen manufactured from "gorilla glass". It features the latest version of Motorola’s MotoBlur software, which includes resizable widgets, corporate security and a battery manager.

Motorola declined to comment on when the Defy will be upgradeable to the latest 2.2 version of Android, called Froyo. Froyo adds full Flash support, built-in wireless tethering, and the ability to store third-party apps on your SD card, though the Motorola Defy already features Flash light and the ability to act as a 3G mobile hotspot.

"Many of our customers tell us they're looking for a smartphone that’s rugged enough to support their active lifestyles”, said Richard Fink, director Telstra mobility products. "We also think it’s going to be a hit with outdoor workers and tradies who want advanced features in a mobile that can take a few knocks."

The Motorola Defy is available for $0 upfront on Telstra's $49 cap over 24 months, which includes $450 worth of calls and text and 1GB of data.