Without Internet, Egyptians find new ways to get online 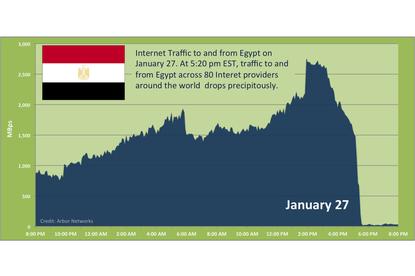 This Arbor Networks graph shows the precipitous drop in Internet connectivity after the government ordered network providers to cut off Internet traffic there on Friday.

"When countries block, we evolve," an activist with the group We Rebuild wrote in a Twitter message Friday.

That's just what many Egyptians have been doing this week, as groups like We Rebuild scramble to keep the country connected to the outside world, turning to landline telephones, fax machines and even ham radio to keep information flowing in and out of the country.

[ Can Australia's internet be switched off, too? ]

Although one Internet service provider -- Noor Group -- remains in operation, Egypt's government abruptly ordered the rest of the country's ISPs to shut down their services just after midnight local time Thursday. Mobile networks have also been turned off in some areas. The blackout appears designed to disrupt organization of the country's growing protest movement, which is calling for the ouster of Egyptian President Hosni Mubarak.

"[B]asically, there are three ways of getting information out right now -- get access to the Noor ISP (which has about 8 percent of the market), use a land line to call someone, or use dial-up," Jillian York, a researcher with the Berkman Center for Internet & Society, said via e-mail.

Egyptians with dial-up modems get no Internet connection when they call into their local ISP, but calling an international number to reach a modem in another country gives them a connection to the outside world.

We Rebuild is looking to expand those dial-up options. It has set up a dial-up phone number in Sweden and is compiling a list of other numbers Egyptians can call. It is distributing information about its activities on a Wiki page.

One of the dial-up numbers is run by a small ISP called the French Data Network, which said it was the first time it had set up such a service. Its modem has been providing a connection "every few minutes," said Benjamin Bayart, FDN's president, speaking in an online chat.

The international dial-up numbers only work for people with access to a telephone modem and an international calling service, however. So although mobile networks have been suspended in some areas, people have posted instructions about how others can use their mobile phones as dial-up modems.

The few Egyptians able to access the Internet through Noor, the one functioning ISP, are taking steps to ensure their online activities are not being logged. Shortly before Internet access was cut off, the Tor Project said it saw a big spike in Egyptian visitors looking to download its Web browsing software, which is designed to let people surf the Web anonymously.

"We thought we were under denial-of-service attack," said Andrew Lewman, the project's executive director. The site was getting up to 3,000 requests per second, the vast majority of them from Egypt, he said. "Since then we've seen a quadrupling of Tor clients connecting from Noor over the past 24 hours," he said.

Even with no Internet, people have found ways to get messages out on Twitter. On Friday someone had set up a Twitter account where they posted messages that they had received via telephone calls from Egypt. A typical message reads: "Live Phonecall: streets mostly quiet in Dokki, no police in sight. Lots of police trucks seen at Sheraton."

Others are using fax machines to get information into Egypt about possible ways to communicate. They are distributing fax machine numbers for universities and embassies and asking people to send faxes to those numbers with instructions about how to use a mobile phone as a dial-up modem.

Members of the hacker group Anonymous have also been getting in on the act. They are reportedly faxing some of the latest government cables from WikiLeaks which reveal human rights abuses under President Mubarak, to locations in the country, according to Forbes magazine.

We Rebuild describes itself as "a decentralized cluster of net activists who have joined forces to collaborate on issues concerning access to a free Internet without intrusive surveillance." It has set up an IRC for people who can help with ham radio transmissions from Egypt. They are trying to spread the word about the radio band they are monitoring so that people in Egypt know where to transmit. Some ham enthusiasts are setting up an FTP site where people can record what they hear and post the recordings. So far, they say they've picked up Morse code messages.

Allen Pitts, a spokesman for the National Association for Amateur Radio, said no one has picked up any voice transmissions from Egypt for the past couple of days. But it's possible that people in Egypt are transmitting over shorter-range frequencies that carry only 30 or 50 miles, he said.

One problem with ham radio is that most people who know how to use it in Egypt were probably trained by the military and may be opposed to the protests. Others may be wary of transmitting because they are worried about who might be listening.

During earlier protests in Iran and Tunisia, the governments clamped down on specific websites, but access to the Internet was not severed in such a wholescale fashion.

It is not unprecedented though. In a blog post Friday written with a colleague, York from the Berkman Center for Internet & Society noted that in 2005 the government of Nepal cut off the Internet connection there, and in 2007 the Burmese government did the same in that country.