Which is the better smartphone – Motorola's Atrix or Samsung's Galaxy S II? 2011 is set to be the year of the dual-core powered Android phone and two of the biggest upcoming releases in Australia are the Samsung Galaxy S II and the Motorola Atrix.

Read our comprehensive Motorola Atrix review and our Samsung Galaxy S II preview, and check out our roundup of the best upcoming smartphones in 2011.

Both of these Android phones have similar specifications — the Motorola Atrix has a 1GHz dual-core processor, a 4in qHD display, a 5-megapixel camera that records 720p HD video, and a fingerprint reader.

The Samsung Galaxy S II on the other hand has a slightly larger 4.3in display, and uses Super AMOLED Plus screen technology. It also has an 8-megapixel camera that doubles as a 1080p HD video recorder, while the Atrix has a 5-megapixel camera. The Galaxy S II also has a slightly faster 1.2GHz processor and is just 8.49mm thick, making it thinner than the iPhone 4 and likely the thinnest smartphone in the world.

So how does the Motorola Atrix compare against the Samsung Galaxy S II when it comes to specifications?

Both the Motorola Atrix and the Samsung Galaxy S II are constructed largely from plastic. Although both may lack the aluminium unibody design of competitors like the HTC Desire HD, the plastic frame of the Atrix feels relatively well constructed, and also has an attractive carbon-like pattern printed onto the rear. The Motorola Atrix is less than 11mm thick, which is a nice surprise given it comes with a large 4in capacitive touchscreen.

If Motorola deserves credit for making the Atrix relatively thin, then Samsung deserves a gold star for making the Galaxy S II almost thin enough to slide under a door. At just 8.49mm thick, the Galaxy S II is likely the thinnest smartphone in the world (at least until another competitor trumps it). The Samsung Galaxy S II has an attractive carbon-like finish on its rear battery cover that Samsung claims makes it easier to grip given its featherweight design.

Motorola and Samsung both deserve credit for their respective designs, but the clear winner here is the Galaxy S II. In addition to boasting a larger display, Samsung has managed to trim the fat and make the Galaxy S II just 8.49mm thick. This is a great example of excellent engineering that deserves to be applauded.

At just 8.49mm thick, the Samsung Galaxy S II is likely the thinnest smartphone in the world — at least until another competitor trumps it.

The Motorola Atrix has a 4in TFT touchscreen but the big drawcard here is its resolution: the Atrix's 540x960-pixel resolution makes it a quarter HD (qHD) screen. In general, the higher the resolution the better, as it increases the pixels per inch on the display. The Atrix's qHD screen means you will see more of a website at once, and video playback and mobile gaming will also benefit.

The Samsung Galaxy S II on the other hand has larger 4.3in Super AMOLED Plus display, making it one of the largest touchscreens on an Android phone in Australia alongside the MOTOROLA Desire HD. Samsung's Super AMOLED Plus is a refinement of the original Galaxy S' Super AMOLED technology and promises a clearer and brighter image, as well as better battery life. The Galaxy S II's screen has a resolution of 480x800.

The Motorola Atrix's qHD SLCD display may sound impressive on paper, but the vibrancy and brightness of the Galaxy S II's Super AMOLED Plus screen is going to be tough to beat — especially if the regular Super AMOLED display of the original Samsung Galaxy S is anything to go by. It's also larger than the Atrix, and that gives it an extra edge. 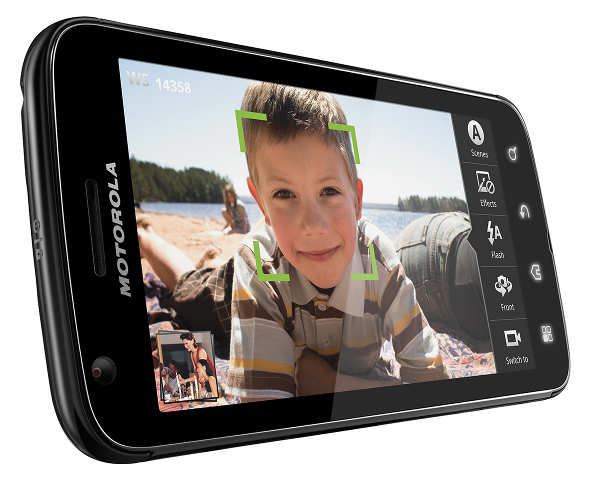 The Motorola Atrix has a 4in touchscreen with a 540x960-pixel resolution, making it a quarter HD (qHD) screen.

The Motorola Atrix runs the 2.2 'Froyo' version of Google's Android operating system, so it supports Flash and has the ability to act as a wireless hotspot. The Atrix should be able to be upgraded to the latest 2.3 'Gingerbread' version of Android given it sports a dual-core processor and very high-end specs, but Motorola hasn't announced when the Atrix will receive this update. The 2.3 'Gingerbread' version of Android will equip the Atrix with a revamped keyboard, better copy and paste, improved power management, and a slicker user interface compared to previous versions of Google's mobile platform.

The Motorola Atrix also comes with the latest version of Motorola's MotoBlur service, a widget-based interface that combines multiple social networking and communications accounts (Facebook, Twitter, MySpace, LastFM, e-mail, Picasa, Photobucket and Yahoo Mail). Motoblur also provides a number of security features including the ability to automatically wipe the handset when it is lost or stolen, and the automatic over-the-air back up of content.

Although both of these smartphones run Google's Android operating system, each has a different UI overlay that is intended to enhance the user experience. Both Motoblur and TouchWiz 4 look appealing in their own way, so a choice between the two will more than likely come down to personal preference.

The Motorola Atrix Android phone comes with an HDMI port, meaning you can connect it directly to a high-definition television. Along with DLNA connectivity for wirelessly sharing media content, the Atrix seems well designed for multimedia sharing.

The Samsung Galaxy S II doesn't come with an HDMI-out port but includes something better: a new connection technology called Mobile High-definition Link (MHL). The on-board MHL technology uses the standard micro-USB port on the Galaxy S II for outputting 1080p HD video and audio via HDMI. You'll need an optional microUSB to HDMI MHL connector to enable this feature, but the beauty of MHL means it can also be used with a USB adapter, meaning the Samsung Galaxy S II can utilise USB on-the-go functionality like the Nokia N8. 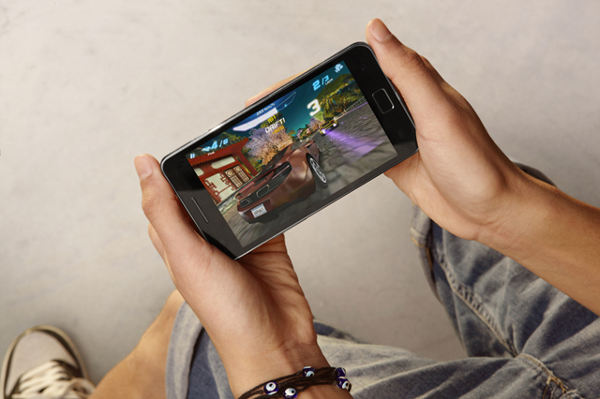 The Samsung Galaxy S II trumps the Motorola Atrix with an 8-megapixel camera compared to the Atrix's 5-megapixel offering, and also records 1080p HD video in comparison to the Atrix's 720p HD limit. However, the Atrix has a power button that's also a fingerprint reader; the button is recessed and is situated in an awkward position, but you can use a fingerprint to unlock the Atrix, which is handy for extra security.

Samsung may also equip the Galaxy S II with an integrated Near Field Communications (NFC) chip. NFC is a short-range wireless communication technology, the same used in many new credit cards, whereby the card can be simply swiped across a smartchip to make a purchase. This technology is rumoured to be an inclusion on the upcoming iPhone 5, although we've seen conflicting reports about this. Globally, Samsung says it will ship two versions of the Galaxy S II, one with NFC and one without. The latter is what the company has started shipping in Europe, while the Korean version of the Galaxy S II includes the NFC chip. It is not yet known if the Australian version of the Galaxy S II will include NFC.

Motorola offers two advanced accessories for the Atrix. The HD Multimedia Dock and Bluetooth remote ($129) allows the Atrix to be connected to a high-definition television or monitor and comes with a USB port to connect peripherals like a keyboard and mouse; the Laptop Dock ($449) turns the Atrix into a notebook computer with full Web browsing capabilities, document editing and playback access.

Another point worth noting is the fact that both the Samsung Galaxy S II and the Motorola Atrix are quad-band HSDPA phones, so they will work across all Australian networks including Telstra's 850MHz Next G network.

The Motorola Atrix is powered by a 1GHz dual-core processor, has 1GB of RAM and comes with a microSD card slot for extra storage. The Atrix will be available in Australia from 7 June, and is exclusive to Telstra until the end of July, where it is then expected to be available through other carriers. It can be purchased on Telstra's new freedom connect plans including the $59 plan with a mobile repayment option of $20 per month. This plan includes $550 worth of calls, unlimited text messages and 1.5GB of data. Telstra will also sell the Motorola Atrix outright for $840. 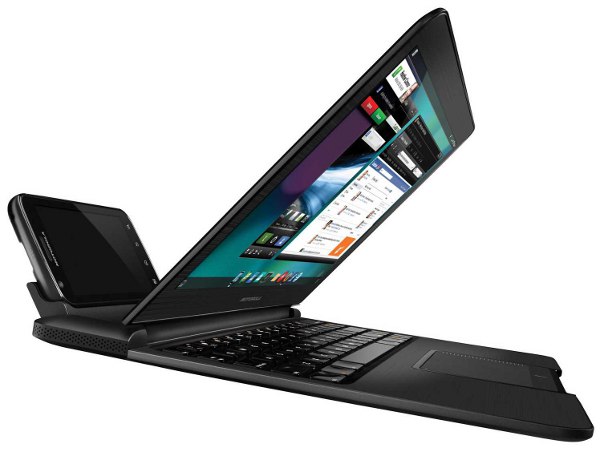 The Samsung Galaxy S II is powered by a 1.2GHz ARM Cortex A9 dual-core processor, has 1GB of RAM and 16GB of internal memory, along with a microSD card slot for extra storage. The Galaxy S II will launch in Australia in May, and will be available through all Australian carriers — Telstra, Optus and Vodafone. Pricing has yet to be announced.

What do you think about the Motorola Atrix and the Samsung Galaxy S II? Tell us in the comments below!