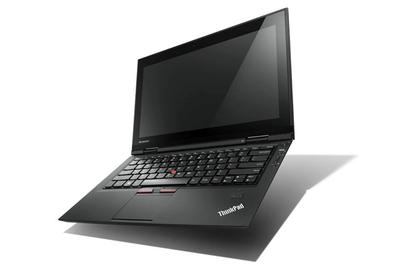 Lenovo has introduced the ultraportable ThinkPad X1 laptop, which the company called the thinnest model yet in its venerable laptop lineup yet.

PC makers have continuously made laptops thinner and lighter, but the effort gained steam after Apple introduced the MacBook Air in 2008. Dell followed with the Adamo ultraportable laptops which have been discontinued, and the company has said it will soon launch a new ultrathin laptop.

The ThinkPad X1 is designed to be rugged, Lenovo said. The screen is based on Gorilla Glass technology, which is used on many smartphones today to protect screens from cracks or scratches. The laptop has also been tested to withstand drops, though the company could not immediately provide distance estimates. The laptop also has a spill-resistant keyboard.

Lenovo has also included a new feature called RapidCharge, through which the battery can reach an 80 percent charge in just 30 minutes. The laptop's charge time is on average 2.5 times faster than other ThinkPad laptops, Lenovo said.

The laptop provides a battery life of around five hours and around 10 hours with an external battery pack.

The laptop includes a 13.3-inch screen, which is slightly bigger than the company's recently launched ultraportable ThinkPad X220 laptop, which has a 12.5-inch display.

An HDMI (high-definition multimedia interface) port helps connect the laptop to high-definition TVs. Intel's Wireless Display technology also comes integrated so wireless content can be streamed directly from the laptop to specific TV sets that are capable of receiving the content.

The laptop is priced starting at $US1399 and will be available worldwide on Tuesday.