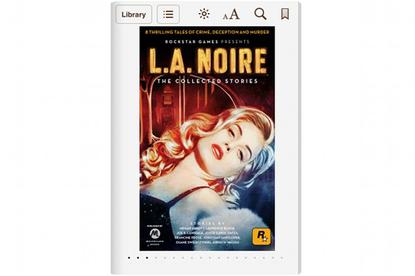 The LA Noire: The Collected Stories eBook on iBooks.

An anthology of short stories written for and inspired by the fictionalised events of LA Noire will be available as a free download for a limited time on the iTunes Store in Australia. The collection of stories can be downloaded through iTunes, or on the iBooks app on iPhone, iPad and iPod touch.

Techworld: How to get free iTunes music

Also available through iTunes and the Amazon Kindle eBook store in the US and UK, and the Barnes & Noble eBook store in the US, the anthology comprises eight short stories inspired by LA Noire's depictions of Los Angeles' grimy 1940s crinimal underbelly. The stories focus on crimes and characters seen in LA Noire like the infamous Black Dahlia murder. Five individual stories have already been released through Rockstar Games' Web site, but these will join three more exclusive stories in the anthology.

The LA Noire: The Collected Stories anthology will be available for free for Australian buyers exclusively on the iPhone, iPod touch and iPad through the iBooks app and iTunes store until June 12, when it will return to an ongoing US$0.99 price.

The Girl, by Megan Abbott
See The Woman, by Lawrence Block
Naked Angel, by Joe R. Lansdale
Black Dahlia & White Rose, by Joyce Carol Oates
School For Murder, by Francine Prose
What's In A Name?, by Jonathan Santlofer
Hell Of An Affair, by Duane Swierczynski
Postwar Boom, by Andrew Vachss