Will the RAZR make a comeback in Android form? 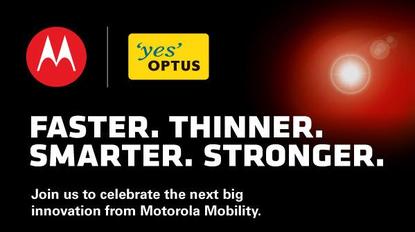 Motorola has released a teaser video for a new smartphone it will announce on 18 October, seemingly hinting that it will be a new version of the iconic RAZR mobile phone.

Read our guide to the best upcoming smartphones in 2011.

The teaser video released on YouTube is titled "Coming soon from Motorola: Four reasons to get excited" and hints at the new device being faster, thinner, smarter and stronger. The video shows multiple references to a razor blade, suggesting this may be a new version of the company's RAZR mobile phone.

The video supports a rumour published by This is my next saying the phone will be called the Droid RAZR or the Droid HD in the US. It also been referenced as the Spyder.

The reported specifications of the Droid RAZR include a 4.3in qHD super AMOLED display with Gorilla glass coating, a Kevlar case with splash-guard coating, a 1.2GHz dual-core processor, 1GB of RAM and an 8-megapixel camera with 1080p HD video recorder.

Motorola today sent an invitation to Australian tech media titled "Join us to celebrate the next big innovation from Motorola Mobility". It seems that Optus will exclusively launch the new Motorola smartphone as its logo was plastered on the invitation as shown above.

Curiously, the Australian Motorola media event is on Thursday 27 October — nine days after the worldwide announcement. Whatever this smartphone is, we'll know well before the Motorola-Optus media briefing.