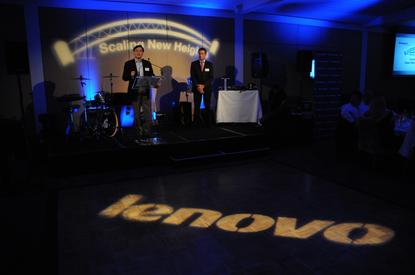 Lenovo surpassed Dell to become the world's second largest PC vendor at the end of the third quarter, according to research firms IDC and Gartner.

Top PC vendor Hewlett-Packard also saw its worldwide PC shipments grow by 5.3 percent in the quarter, despite reports that the company may spin off its PC business.

Both research firms said growth for the quarter failed to reach earlier projections. IDC said at the end of the third quarter, worldwide PC shipments increased by 3.6 percent year-over-year, below its earlier 4.5 percent growth projection.

Gartner said PC shipments grew by 3.2 percent year-over-year, which was lower than the research firm's original projection of 5.1 percent growth for the quarter.

Analysts have pointed to sluggish spending because of weak economic conditions as a key reason behind the slowdown in PC growth. The rise of tablets has also hurt shipments.

"For the moment, PCs have taken a backseat to a range of other devices competing for shrinking consumer and business budgets," said IDC analyst Jay Chou in a statement.

IDC, however, expects PC growth to pick up next year as vendors update their offerings and include more features on laptop devices, he added.

Lenovo posted the fastest growth in the quarter among the world's top five vendors, according to the two research firms. Gartner put Lenovo's market share at 13.5 percent, while it put Dell's share at 11.6 percent.

Lenovo has consistently shown high growth in the last quarters, as the company has worked to expand in developing markets while also protecting its home turf in China, which in the second quarter exceeded the U.S. in PC shipments and sales.

For the quarter, Dell posted a decrease in growth by just over 1 percentage point, according to both research firms.

The U.S. market also moved out of negative growth at the end of the quarter, with IDC reporting that shipments remained flat. "As we approach the holiday season, the opportunity for low single-digit growth is real, but mostly as a result of poor market conditions last year, as opposed to a recovery in demand," said IDC personal computing research director David Daoud in a statement.