The Tokyo-based electronics company said it has developed a new lithium battery that can hold a 70 percent charge after 13 years. 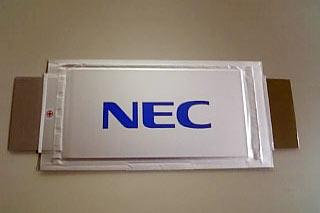 NEC said it has developed batteries that can hold a 70 percent charge after 13 years.

NEC said Monday that it has developed a new lithium-ion battery technology that doubles the life span of conventional models.

The new technology will be used in large batteries for applications such as electrical power systems in buildings and homes, where longevity is a major concern, the Tokyo-based electronics conglomerate said.

Consumers long for batteries that will increase the life of their smartphones and tablets, but a growing market also exists for larger rechargeable lithium-ion batteries used in such fixed locations.

In testing, the new batteries could hold 83 percent of their original charge after 23,500 cycles, which the company equated to over four years of standard use. The tests were done at 25 degrees Celsius.

NEC estimates that the new technology could produce batteries that can maintain 50 percent of their original charge for about 33 years, or over twice the 15-year mark of batteries now in use.

The batteries use an organic sulfur compound to help prevent the buildup of internal resistance in lithium batteries that gradually cuts their power output and life span, NEC said.

The company has no concrete plans on when it will commercialize the technology, a spokesman said.