The new flagship camera will be faster, feature a 51200 ISO and contain enhancements to its controls and menu system 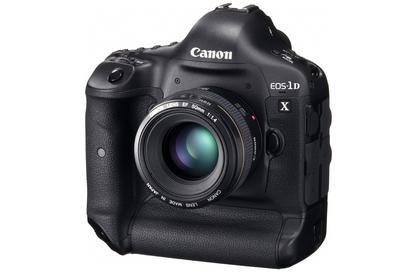 The new full frame, 18-megapixel Canon EOS-1D X will be available in March 2012.

Professional photographers who use Canon gear will be able to upgrade their kit next year as the company has just announced the EOS-1D X. The new camera will replace the EOS-1D Mark IV and EOS 1Ds Mark III and it will offer improvements in speed, resolution and focusing performance.

The EOS-1D X will feature an 18.1-megapixel, full frame, 35mm CMOS sensor and two DiG!C 5+ image processors. The dual processors will speed up the camera's performance as well as provide it with lots of grunt for applying noise reduction to images. Low-light shooting will be aided by a large standard ISO range of 100-51200, which is vastly bigger than the EOS-1D Mark IV ISO range of 100-12800.

The EOS-1D X will also have a lot more focusing points to play with -- 61 compared to 45 for the EOS-1D Mark IV. This increase in focus points along with a dedicated DiG!C 4 processor for automatic exposure (AE) should improve object tracking accuracy. The camera will also be able to shoot continuously at a speed that is 2 frames per second higher than the previous flagship camera (12fps compared to 10fps).

Video will not be left out of the equation as the EOS-1D X will have the ability to capture motion in Full HD (1920x1080 at 24/25fps) and will support the ALL-I compression format as well as IPB format. In a statement in a press release today, EOS brand manager Cathy Hattersley said the new camera "is the ultimate all-rounder for professionals from sport, photojournalism and nature photography through to studio, fashion and wedding/portrait work".

The camera will be made of magnesium alloy, have 76 moisture seals and its shutter will have a rating of 400,000 cycles. It will also sport a new menu system and enhancements to its buttons, as well as some new buttons, and all changes are based on Canon's user feedback.

The EOS-1D X will be available in March 2012 from professional Canon dealers. A price for it has not yet been set.

In other news, Canon is also celebrating a manufacturing milestone: the production of 50 million EOS series SLR cameras, which was reached in September 2011. It says it will also reach 70 million EF lenses by the end of October.