The Japanese manufacturer is targetting industrial settings such as factories and will charge about $5,200 per unit 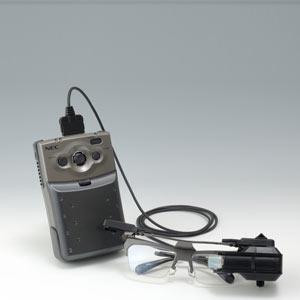 NEC will sell a mini computer with special glasses that project the screen onto the eye.

NEC said Tuesday it will sell a wearable mini computer with a head-mounted display that projects its screen onto the naked eye.

The "Tele Scouter" will initially be aimed at factory workers and other industrial settings, and expanded to entertainment and augmented reality applications in the future, the company said. The computer is about the size of a thick paperback and can be worn clipped on a belt, while the display is mounted to a pair of clear glasses so that it can be viewed alongside the real world.

The display, developed by Japanese maker Brother and called "AIRScouter," uses a tiny projector to flash images onto the naked eye. Viewers experience images as thought they were being seen on a 16-inch, 800-by-600 resolution screen from a meter away.

As the images only take up a portion of users' field of vision, NEC said it is targeting applications where workers could use it to view instruction manuals or other images while on the job. The headset is equipped with a camera and microphone, and NEC is also selling a software package that allows supervisors at a remote control center to share images and chat with workers over wifi.

The small computer runs a version of Windows CE for embedded devices on a 500 MHz ARM processor. The entire setup weighs about 430 grams and will run for over four hours on a charge.

The system is an upgrade from a similar but bulkier mini computer announced by NEC in 2009.