Before you decide whether to choose a phone with iOS or Ice Cream Sandwich, here's a look at highlights from both OSes 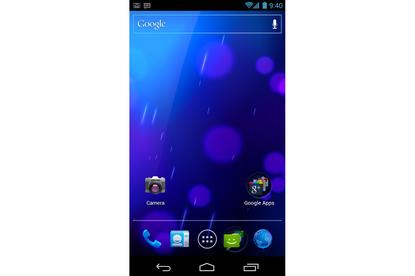 ICS on the Galaxy Nexus will launch in November, pricing was not announced.

Since ICS is now on its way and Apple's iOS 5 and the iPhone 4S were recently released, prospective smartphone buyers can choose between the new versions of the two leading smartphone brands. And the differences between the two are many: do you want deep voice command integration with the iPhone 4S' Siri digital assistant or will Voice Actions for Android be enough for you? Do you want to take a lot of panoramic shots or do you just want a solid camera without too many features?

Before you decide whether to land in the iOS or Android camp in the coming weeks, here's a look at the highlights of the new versions of both operating systems.

Apple and Google have made improvements to their camera software and both operating systems now share the ability to access the camera from the lock screen. Apple also added to iOS 5 the ability to use grid lines to help you get your shot lined up just right as well as pinch-to-zoom.

Google's Ice Cream Sandwich has a new panoramic mode that stitches together multiple snapshots to create a larger scene. ICS' new panoramic mode includes a slider at the bottom of the screen to help you align your multiple shots. The panoramic shot above was posted to Google+ by Google employee Matt Cutts. The photo was taken at Yosemite National Park using a Nexus S running ICS.

Once you're done taking photos both ICS and iOS 5 have baked-in tools to help you improve your photos such as crop and rotate, remove red eye and auto-enhance. ICS will also let you set levels and add Instagram-style filters.

Google has added some enhancements to Voice Actions for Android in ICS, but anyone hoping for an answer to iOS 5's Siri-style integration will be disappointed. However, ICS voice command software now has a hands free feature that lets you activate voice actions just by speaking to your phone instead of pressing a button.

People purchasing the new iPhone 4S, meanwhile, get to take advantage of iOS 5's new Siri personal digital assistant that lets you carry out a number of tasks using voice commands. Some of the most interesting new Siri features include creating calendar appointments, setting alarms and timers, retrieving basic facts and figures from Wolfram Alpha, and adding location-based reminders.

Both voice command services also let you do things such as play music, search the web, and dictate notes, SMS and email messages.

ICS has beefed up its browser capabilities with new features such as Google Chrome bookmark sync, incognito mode and the ability to save full web pages for offline reading. Apple's iOS 5 browser includes tabbed browsing for the iPad (added to Android tablets with Honeycomb), private browsing, Safari Reader and Reading List a feature that lets you save web pages to read later. Unlike ICS, however, Reading List does not allow for offline caching. Reading List also syncs across all your iCloud-enabled devices including desktop PCs.

ICS' notifications include a few enhancements such as allowing users to pull down the notifications window from the lock screen. Google has also added a new feature called the Recent Apps list that lets you view thumbnail images of all your running apps and jump between them with one tap.

ICS has a new People app that is reminiscent of Windows Phone 7's people hub. The new Android app includes a larger profile photo for each of your contacts and integrates their social networking status updates from services such as Twitter and Google+. ICS also has a new Gmail app that is supposed to be faster, includes a new preview pane and lets you search the last 30 days of your e-mail offline. Google has also updated Calendar, Maps and Music, but the company has yet to fully demonstrate what the new changes are. There is also a new data usage app that shows you how much data you've been using on a graph, and you can also see usage forecasts to plan around your bandwidth caps.

Apple added to iOS 5 a new Reminders app that is location aware (Siri integration for iPhone 4S only). There is also Newsstand for receiving automatic updates from your iOS news and magazine apps such as The New York Times, The Daily and The Economist. Apple's Blackberry Messenger rival, iMessage, also lets you send text messages to other iOS 5 devices (including the iPad). IMessage doesn't count against your monthly text messaging allotment from your carrier but it does use 3G data if you're not on Wi-Fi.

Android users have been able to store items in the cloud for some time including purchased apps and now music with Google Music and photos via Google+. Apple plays catch-up in some ways with the addition of iCloud that includes syncing apps across all your devices. Although both services are reaching music and photo storage around the same time. ICloud also syncs your documents for you, and iOS 5 users can now get over-the-air system updates via Wi-Fi to their iOS devices. Android has had over-the-air updates for some time.

Google also added a minor, but interesting, security feature that lets you unlock your phone with facial recognition. And ignoring phone calls gets easier with a new set of canned responses that lets you text a caller to let them know why you didn't answer your phone.

So which phone are you going for: the iPhone 4S or the new Galaxy Nexus due out in November?

Connect with Ian Paul (@ianpaul ) and Today@PCWorld on Twitter for the latest tech news and analysis.