A slim, 11.6in tablet that runs Windows 7 and an Intel Core i5 CPU; great for business or pleasure 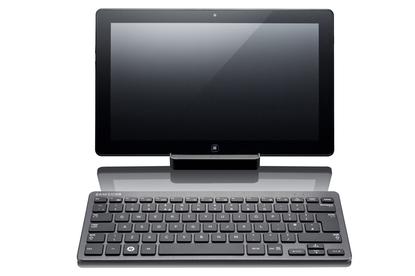 Samsung's Slate PC Series 7 runs Windows 7 and is powered by an Intel Core i5 CPU. It's a tablet that's both comfortable to use and powerful and we think it will become a popular model among business users as well as home users.

Samsung's Slate PC Series 7 has a hardened, 11.6in capacitive touchscreen with digitiser technology and it can be navigated with your finger or the supplied digitiser pen. In a brief hands-on session at Samsung's headquarters today, we were able to play with a pre-production sample of this tablet running Windows 7 Pro and a specially designed touch interface overlay. The overlay offers a touch-friendly way to launch popular apps and utilities and you can easily minimise it to get to the main Windows 7 interface if you wish.

The tablet is run by a low-voltage Intel Core i5-2467M CPU, 4GB of RAM and a 64GB solid state drive in its thin (13mm) chassis and it has vent holes and a small dynamically-controlled fan to keep the components cool. The battery is sealed inside the unit and has a 40 Watt-hour rating. We'll have to wait and see how long it can last, but it should do quite well, especially in standby mode, in which a snapshot of the current state of the system is saved to disk rather than RAM and then accessed as soon as the Slate is woken up -- similar to hibernation, but with much quicker start time (as we witnessed). Samsung says this helps to prolong the standby life of the unit.

The hardware itself felt great to hold (despite being a little creaky due to being a pre-production model) and we observed a very bright screen (it's rated at 400 nits) with wide viewing angles. The screen uses PLS (plane line switching) technology and has rated viewing angles greater than 170 degrees. We had no problems viewing the screen no matter which way we held the slate and the orientation of the screen changed automatically as we turned it. There is a dedicated button on the side for changing the rotation manually, too. There are cameras on both the front (2-megapixel) and rear (3-megapixel) of the unit and you get micro-HDMI, USB 2.0, micro SD and audio ports, too. You also get 802.11n Wi-Fi, Bluetooth 3.0, but 3G connectivity is optional.

Accessories for the Slate include a little dock and a Bluetooth keyboard that can transform it into a regular computer -- and because it runs Windows 7 and has a speedy Core i5 CPU in it, it does feel like a normal computer when you use it this way. The dock also supplies Gigabit Ethernet, USB 2.0 and HDMI, as well as power. Because the dock is so small though, we had to attach it by bringing it up to the Slate and plugging it in while holding both devices, rather than just dropping the Slate into the dock as it rested on a flat surface. But this is because the dock is so light, which is key if you want to take it travelling with you.

We think that anyone who needs a tablet device as well as a notebook (or anyone who has been considering a tablet-convertible notebook PC) might be drawn to this product because of its speed and keyboard accessory. Unlike tablet-convertible notebook PCs, the Slate PC Series 7 is not bulky and the touch interface doesn't seem to be an after-thought. It also has fast start-up and resume capabilities.

Perhaps the most positive aspects of this slate PC are its size and performance. At 11.6 inches and just under 900 grams, it felt very comfortable to hold and the system seemed swift during our brief time with it. It's a device that we think will be great for hand-written notes. We could easily take notes on it while resting the palm of our hand on the screen and its accuracy was as good as we've seen from other tablet PCs. It uses Windows 7's built-in tablet features for handwriting recognition, so you can insert your scribbles into Word or whichever applications you want to use. If you're a graphic designer, you might even want to give it a go as a drawing pad; however, it might not be an optimal device for high-end graphics programs.

Basically though, we think this device is bound to find its way onto the wish lists of not only business users (and integration into existing business networks should not be a problem due to the use of Windows 7 instead of Android) but also home users and students who want something that can be used to create content in addition to consuming it. You can easily sit in front of the TV while using this slate PC to write notes or browse the Web.

The only thing that might be a hindrance for many people is the price point, but for a slate that runs a Core i5 CPU in such a thin chassis, and for something that runs Windows 7 as well as a custom touch interface, we think it will compare well against tablet-convertible notebooks PCs from the likes of Fujitsu (which is perhaps the most prolific brand when it comes to tablet-convertibles) and other notebook vendors. In terms of form factor, its closest competitor will probably be Lenovo's ThinkPad tablet, which runs Android, and Fujitsu's Stylistic, which runs Windows 7 Pro but is very underpowered due to its Intel Atom CPU.

The Samsung Slate Series 7 is not meant to compete against the iPad or any Android tablet devices. During our brief hands-on session, we thought it looked good and felt comfortable to use and we see it as being a valuable productivity tool in addition to a media consumption device. We can't wait to give it a full review.