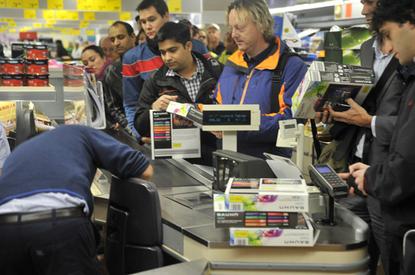 Advertised last week as a limited run special, the 9.7in Android tablet sold out in less than five minutes at Aldi's North Sydney store in New South Wales. The store opened its doors at 8:30am but stocks of the tablet were exhausted after just a few minutes.

A crowd of well over 100 people attempted to buy the device, but most customers were left disgruntled and annoyed. A number of customers were sold multiple units, in one case as much as three per customer.

"I was probably about the twelfth person here [at North Sydney Aldi]," explained consumer Matt Thompson. "They told us that the tablets were racked up at the back but had them at the register. I got all lined up and those that got in front were buying two or three tablets each — I didn’t manage to get one," he said.

PC World has contacted Aldi to clarify stock levels across other stores but is yet to receive an official response.

Aldi advertised the Bauhn branded Android tablet last week saying stocks of the device would vary between stores and that it may sell out on the first day due to "unexpected high demand."

The Bauhn tablet has a 9.7in display, 16GB of internal memory and a 2-megapixel rear-facing camera but does not include GPS. The device is powered by a 1GHz single-core Amlogic Cortex A9 processor (despite incorrectly advertised as a dual-core chip on the manufacturer Web site), has 1GB of RAM and a microSD card slot that allows users to expand the memory.

Other features of the tablet (model number AMID-971R) include Wi-Fi and Bluetooth connectivity, a VGA front-facing camera for video calls along with mini-USB and mini-HDMI ports and a standard 3.5mm headphone jack.

The Aldi tablet sellout this morning comes on the back of cut price Australian manufacturer and retailer Kogan selling out stocks of a budget Android tablet in just four days last week. Like the Bauhn device, both of Kogan Agora's tablets run the latest 4.0 Ice Cream Sandwich version of Google's Android operating system.

PC World has contacted Aldi Australia for comment and will update this report when we learn more.