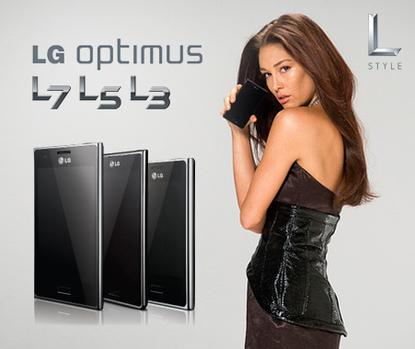 Erin McNaught is the face of LG's new campaign to market the L-Style range of Android smartphones. <i>(Image credit: LG)</i>

LG has today officially announced the launch of its aggressively priced L-Style range of Android smartphones in Australia and will use TV personality and former Miss Australia Erin McNaught to market the phones.

The four new Optimus phones — the LG Optimus L3, Optimus L5, Optimus L7 and the Optimus L2 — form part of the company's "L-Style" range and are all pre-paid devices. LG revealed some details surrounding the L-Style range to PC World Australia back in May, but formerly made an announcement today.

To market the L-Style smartphones in Australia, LG has appointed TV personality and former Miss Australia Erin McNaught as the face of the campaign.

LG says the L-Style design is based around five aesthetic elements — a modern square-style that aims to provide comfortable grip, a "floating mass" screen for a slimmer look, a more intuitive arrangement of menu keys, metallic accents and a slim shape.

"It's LG's first major launch this year and it's great that the whole family of L-Series handsets are being ranged in Australia," LG Australia's Head of Mobile Communications, Ben Glimmerveen told PC World Australia back in May. "We feel that there's a clear relationship between all three handsets. I think that's one of the first things that we needed to get right within the pre-paid space."

The L-Style phones start with the entry-level Optimus L3, which retails for just $99 exclusively through Telstra. Available now, the Optimus L3 has a 3.2in "floating mass display" with a resolution of 240x320, runs the 2.3 "Gingerbread" version of Google's Android operating system and has a front-facing camera for video calls. The floating mass display is a result of the display being positioned closer to the surface of the screen.

Earlier this year, LG admitted to PC World Australia that it had "dropped the ball" in smartphones in the last 12-18 months. At the time, the company promised to launch at least four 4G smartphones in Australia by early 2013 in a bid to turn around its fortunes.

The L-Style launch is the Korean company's first major launch in Australia this year. The range was officially revealed at the 2012 Mobile World Congress (MWC) trade show in Barcelona back in February.