Despite being ahead of the technology curve, Japanese smart phones never saw a global release even in key markets such as the U.S. and Europe. 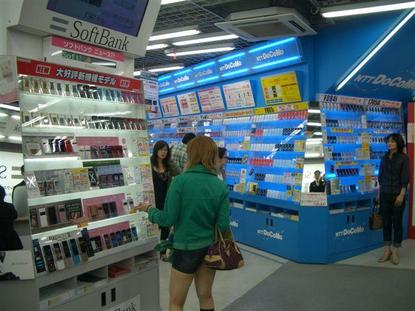 Once the envy of overseas markets, Japanese mobile phones are increasingly becoming a rarity in the coutry due to the popularity of smartphones such as the Apple iPhone

For the longest time, Japan reigned supreme when it came to the latest technology and gadgets. This high level on innovation and ingenuity enabled several Japanese vendors to quickly make a name for themselves and soon expand to overseas markets. As manufacturing methods and logistics improved over the decades, the world’s population got their hands on the latest VCRs, televisions and video game devices that were “made in Japan". But one technology that was notably absent in Japan’s technology boom in overseas markets was the mobile phone.

While consumers in the West were content with their humble Nokia handsets through the 90s and the early 00s, any visitor to Japan would have been surprised and impressed by the sheer advancement and variety of mobile phone technology available in the island nation. Large colour screens, Internet access, email support – all standard on Japanese mobile phones years before the iPhone and the smartphone revolution began. But while these advanced mobile phones enjoyed growing success in Japan, to the extent where the handsets would receive a minor hardware refresh for every season of the year, this phenomenon was isolated to Japan.

The large size of the Japanese consumer market is what NTT Australia managing director and CEO, Yoshimasa Hashimoto, believes enabled the high level of growth and innovation in it. In particular, he highlights the introduction of i-Mode, NTT DoCoMo's mobile internet service in Japan, in 1999 as the key growth driver in the early 00s. “i-Mode enabled phone users to use a lot of applications such as net banking, online payment and shopping, customised ring tones using popular music, as well as e-mails, text messages, and the other prevailing features which currently smartphones can provide,” Hashimoto said. He also points to the fact that the development of mobile phone technology received heavy investment from the three major telcos in Japan: NTT DoCoMo, KDDI and Softbank (formerly Vodafone Japan).

In addition to the large population of more than 125 million, disposable income is also high, which IDC analyst of mobile research in Japan, Michito Kimura, feels led to Japan becoming a very “gadget loving country.” As such, Japanese consumers have tended to be very open to new mobile technologies. “Japanese technology vendors have been very good at making their devices smaller and lighter through clamshell and slider designs, as well as adding new features such as better cameras,” he said. “The success of Japanese mobile phones was also driven by the i-Mode Internet service and Japan-centric software content available through it, such as games and comics.”

While the large consumer technology players such as Panasonic, Sharp and Sony have a long and successful history of releasing mobile phones in Japan, they never really took the next step and had their handsets sold overseas through their existing distributor network, leaving many industry pundits and consumers wondering why. Hashimoto attributes this to the Japanese market being big enough for the vendors to keep their business profi table without needing to look outside for further revenue. “More importantly, the development of technology was driven by the three major telco operators whose business was mainly domestic in Japan,” he said.

While multinational vendors may have the means to market and sell their products overseas, Kimura feels the problem was that the Japanese mobile market went down its own customised road, which over time resulted in a very unique environment. “Instead of adopting standard 3G specifi cations, Japanese telcos have adopted their own 3G specifi cations for both networks and handsets,” he said. “3G in Japan initially started off using the standard specifications, but over time the 3G infrastructure changed to become Japan-centric and ultimately different from what it was worldwide.’ Kimura feels that Japanese handsets would have faced an uphill battle overseas despite their high technology. “Because Japanese handsets have enjoyed success domestically, vendors became very focused on meeting the tastes of domestic users,” he said. “Thus, the features that are unique to Japanese phones may ultimately not appeal to overseas consumers.”

Though Kimura does not doubt that Japanese vendors wanted to do business outside of Japan, the investment needed to properly market and localise the handsets overseas ultimately proved too daunting for most manufactures. While Japan may have been content to rest on its laurels and focus exclusively on the Japanese market, this has meant other large vendors in Asia have picked up the slack. “Countries such as Korea have been a bit more proactive about pursing markets outside of their own domestic one,” Kimura said. “Korean vendors such as LG have already marketed their products overseas in order to expand their market reach beyond their shores.”

Japan may have remained untouched when it came to technological innovation, such as the introduction of smaller devices with bigger screens, as well as streaming television broadcasts with 1seg technology in 2006, the introduction of Apple’s iPhone in 2007 and smartphones in general has shaken up the market. Originally the trend setter, Japanese handsets are starting to have their once lucrative domestic market eroded away by imported smartphones. This has meant that the window for Japanese phones going global has not only narrowed, but possibly closed entirely. “Looking at the landscape of the global market, Apple and Samsung have gained ground in the fast growing smartphone market,” Hashimoto said. “It would be diffi cult for them to turn this trend around and continue to supply mobile phones with features unique in the Japanese market."

Hashimoto adds that the major vendors have in recent years suffered from aggressive market penetration in Japan by foreign vendors, as well as challenges in their core business globally caused by the Tohoku earthquake and tsunami, and the floods in Thailand. “It seems to me that it would be extremely diffi cult for them to take a risk and justify an aggressive investment to enable them to compete against Apple and Samsung in the global market,” he said. While he does not believe that Japanese phones will disappear completely, he does foresee some features found in the phones in Japan such as Near Field Communication (NFC) chips appealing to the global market. “However, that technology requires the collaboration of other industries, such as retail stores, airlines, and banks, which could prove to be very challenging,” Hashimoto said.

When Kimura considers whether Japanese vendors are able turn this situation around and claim a larger market share overseas, he also feels that it may be too late. His reasoning for this is while Korean vendors have been able to set up effi cient mass production methods for good quality products that are accompanied by strong logistics, Japanese vendors have traditionally trailed in these areas on a global level. “While Japanese mobile technology is good, it is not on the same level as what can be found in Android and iOS devices,” he said. “Unless there is a major change in the Japanese mobile industry, I think it would be hard for Japanese handset vendors to market their products overseas and see success in today’s market.”

iPhone: Is it Big in Japan?

In a market as unique as Japan's, it is no surprise that overseas handset vendors faced an uphill battle in selling their devices in the country. Industry heavyweight, Nokia, gave it its best shot, but after years of failing to make inroads in the market, it withdrew from the market in late 2008 and its luxury sub-brand Vertu in middle of 2011. But with Apple’s behemoth, the iPhone, continually wowing consumers worldwide generation after generation, did it manage to succeed where other had valiantly tried and failed?

When the iPhone 3G launched in Japan in the middle of 2008, it failed to make a splash in the market. While there was initial interest by consumers for its then large touch screen and general goodwill for past Apple products such as the iPod, it did not catch on. The issues consumers had at the time was the lack of emoticons available for emails, the expensive pricing of the yearly plan and the lack of Japanese-centric apps on the iTunes App Store. Japanese consumers had also grown used to functions such as NFC chips and 1seg in their handsets, which the standardised iPhone lacked.

When the iPhone 3GS was released the following year, it was a different story. Apple incorporated the emoticons in a firmware update, the pricing was more manageable and Japanese apps were growing in the App Store. The increased processing speed of the 3GS meant that consumers overlooked the lack of NFC and 1seg, although they could watch 1seg with a separate add-on if they wanted too as well. The momentum continued to build with the release of the iPhone 4 in 2010, and despite the 2011 Tohoku earthquake and tsunami putting a dent on consumer confidence, the iPhone 4S enjoyed record sales last year and is now supported by two of the three major phone networks in Japan, Softbank and KDDI.