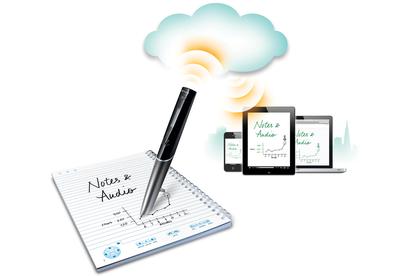 Livescribe's new partnership with cloud-based note service Evernote will potentially help promote and market its smartpen technology to be widely adopted in the marketplace, the company claims.

Speaking at the launch of its newest latest smartpen device, the Sky wifi, Livescribe's co-founder and executive vice president, Sasha Pesic, said the company's new partnership with Evernote was a logical fit and could potentially raise consumer awareness of smartpen technology.

"It's really awareness that's holding the smartpen back from being adopted widely," explained Pesic. "What we've found is, the majority of people exposed to the smartpen buy it within 30 days, the question is how do you get that leverage out there?"

"It would require a lot of marketing dollars to get that coverage out there. Now we are a companion device and we have this partnership with Evernote where they're super excited about it as well, so it will be marketed directly through their own ecosystem."

"We believe this will bring that barrier down so that people are made aware of it [the Sky wifi smartpen] and will adopt it," he said.

Aiming to fill a need for tablet owners who want fast, easy access to their handwritten notes, Livescribe's new Sky wifi smartpen features built-in Wi-Fi connectivity and automatically uploads recorded notes and audio to the free Evernote service. Recordings and notes can then be accessed through any browser, or directly through Evernote's range of client apps on tablets, smartphones and PCs.

"The Livescribe pen was simply a pen and pc environment when it first launched, but we are now riding the cloud strategy that Evernote has created," said Pesic. "We put the Note in Evernote."

Pesic said that the company's research found that tablet owners place a strong importance on their notes. Notes written with the Sky wifi smartpen are automatically pushed to the cloud through Livescribe's service, then stored in Evernote's cloud service.

The adoption of Evernote does away with the need for specific Livescribe desktop software and unlike previous smartpen models such as the Echo, the Sky wifi pen no longer needs to be plugged into a PC to syncronise.

The core functionality of the Sky wifi smartpen hasn't changed. The device digitally records audio and your handwriting simultaneously using special Livescribe dot paper. Once recorded, you can tap anywhere on your notes to playback the audio from that particular moment in time.

Livescribe says the Sky wifi smartpen should provide up to four and a half hours of battery life with Wi-Fi switched on, or about 11 hours if you turn the Wi-Fi connection off. Pesic says the company did seriously look at 3G or 4G connectivity but said "there's only so much battery available".

Among the possibilities using the SDK include features like using the smartpen to write on the physical notepad but have the contents directly appear on a predefined area of an iPad document, and an app called Sky Pad that allows users to draw on a physical notepad then send the drawing in the direct line of an email using a tablet.

Livescribe will sell three models of the Sky wifi smartpen in Australia. The entry-level 2GB model will retail for $229, the 4GB model for $275 and the 8GB Pro model will sell for $345. The latter includes a 12-month Evernote premium subscription, which adds a number of new features including boosting your monthly upload quota to 500MB from the standard 60MB.

The Livescribe Sky wifi smartpen will be available in Australia through foundation retail partner Officeworks, though the company says it is looking at "a couple of different retail partners" in the near future.