Samsung Galaxy Note II will sell for $899 outright, but telco pricing is yet to be revealed 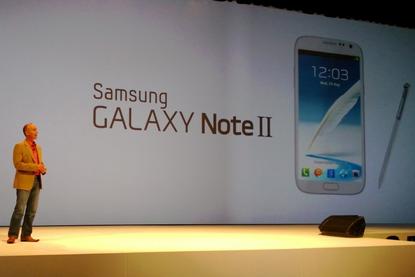 Samsung will launch its hotly anticipated Galaxy Note II Android phone in Australia "next week" through Telstra, Optus and Vodafone, but no contract pricing or plan details have been revealed yet.

The company officially unveiled the Galaxy Note II last night at a media event in Sydney, where it was announced the device would sell for $899 outright "from next week". The model launching in Australia is the N7105 version that features 1800MHz 4G connectivity, so the device will work on the Telstra and Optus 4G networks in Australia and will support Vodafone's 4G network when it launches sometime in 2013.

The Galaxy Note II will be sold through all three major carriers in Australia but no pricing or plan details have been announced yet. At the time of writing, the Galaxy Note II was not listed for pre-order or sale on the Telstra, Optus or Vodafone Web sites.

Unveiled internationally in August at the IFA (Internationale Funkausstellung) consumer electronics trade show in Berlin, the Galaxy Note II is the successor to the original Galaxy Note smartphone. The new model has a larger 5.5in screen, a faster, quad-core processor and runs the Google's 4.1 'Jelly Bean' version of Android.

Like the original Galaxy Note, the Galaxy Note II once again comes with an "S Pen" stylus that allows users to take notes, draw onto the screen and annotate images and PDF files.

At the time of its unveiling three months ago Samsung refused to comment on if or when the Galaxy Note II would be officially available in Australia. A number of grey import models of the device have been available for purchase Down Under since early October.

The Galaxy Note II has been available in Europe, Asia and the Middle East for a number of months and was officially released in the US in late October.

Despite initially expected to be a niche device, Samsung announced in August that it had sold 10 million units of the original Galaxy Note worldwide. The milestone came four months ahead of schedule, as the company initially forecasted it would sell 10 million units by the end of 2012.