We play test Codemasters’ re-imagining of the high speed sport 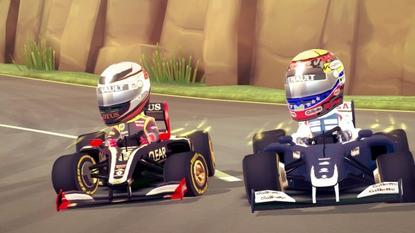 F1 Race Stars came completely out of left field, with no previews, announcements or teasers. While Codemasters’ other racing franchises such as Grid and Dirt came out with great fanfare, F1 Race Stars remained almost entirely under the radar until the finished product shipped. Despite the lack of promotion by Codemasters, the racing game seemed interesting from first impressions.

Instead of taking the simulation route with F1 racing, F1 Race Stars is actually a kart racer that nevertheless features real world teams, drivers, and vehicles, with the latter two being presented in a super deformed format. Just like the cars and driver, the tracks have also been compressed and feature numerous landmarks from the countries where they are set, whether the said landmarks are in the vicinity of the real world track or not. The finished product followed through on the interesting design premise, featuring detailed and stylised visuals that immediately pop out.

The game runs well considering all of the racers on screen and the elaborate design of the tracks. The racing is fast and satisfying, though the same could not be said with the battle component. While kart racers such as Sonic & All-Stars Racing Transformed make use of explosive weapons which often spectacularly wipe out racers when hit, F1 Race Stars takes a tamer route and does not really depict any damage when projectiles hit.

Stuck in the pit

It seems that the F1 license in this case was both a blessing and a curse, with the game obviously benefiting from having official FIA racers, but no doubt unable to do anything radical with the license. Considering the game’s cutesy presentation, it would seem that F1 Race Stars is targeted at children, though the difficulty would say otherwise. The game seemingly puts an emphasis on precision, yet it is not a simulation of the sport but a casual kart racing experience.

A mistake during a race could cost the player the podium, meaning a restart is often the only option as the unforgiving AI makes it near impossible to catch up, despite the tracks generally being long. As a result of the difficult AI, the game works better when played in multiplayer with real people, whether it is online or split screen. While the advent on online gaming has meant that four player split screen has gone the way of the dinosaur, it is still nice to see games such as F1 Race Stars include the feature for those who are keen to try it.

- Nice graphics which run at a good frame rate.

- Difficult AI makes it difficult for the player to place in the top three.

- Weapons are unimaginative and ultimately unsatisfying.

- Never really seems to live up to its potential as an arcadey F1 racing game.

F1 Race Stars shows a lot of potential but is held back by several ningling issues, ones that Codemasters will hopefully solve if they decide to do a sequel.