The chips could one day be applied to the skin, heart or brain to diagnose and treat illnesses 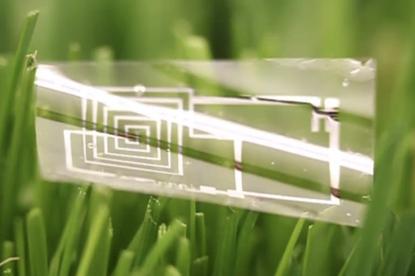 Researchers in the U.S. have developed integrated circuits that can stick to the skin like a child's tattoo and in some cases dissolve in water when they're no longer needed.

The "bio chips" can be worn comfortably on the body to help diagnose and treat illnesses, said John Rogers, a professor of materials science at the University of Illinois at Urbana-Champaign, who described the research at an IEEE conference in San Francisco on Monday.

He and his students are working at the intersection of biology and electronics, experimenting with elements and compounds to come up with "epidermal electronics" that are soft and flexible, yet durable enough to be worn like a second skin.

The circuits are so thin that when they're peeled away from the body they hang like a sliver of dead skin, with a tangle of fine wires visible under a microscope. Similar circuits could one day be wrapped around the heart like "an electronic pericardium" to correct irregularities such as arrhythmia, Rogers said.

Silicon is usually too rigid to be molded to the body, but sliced to a nanometer thick, or a billionth of a meter, it becomes a "floppy" membrane that can bend and twist, Rogers said. It's still fragile, however, so it needs to be laid on a rubber-like substrate that gives it strength. And it still won't stretch, so the researchers form the circuits into ribbed structures that can flex back and forth like an accordion.

The circuits can be applied like a child's temporary tattoo, Rogers said, by laying them on the skin and washing off a thin, soluble backing. The resulting circuit is about 5 microns thick and can stretch by about 30 percent, equivalent to how much skin will stretch.

To show the technology, Rogers rolled up his sleeve during his talk and, using a microscope and an overhead projector, revealed a circuit stuck on his arm. It looked like a clear tattoo, with a spaghetti-like mass of wires embedded in the surface.

The researchers are also working on "transient" circuits that dissolve in water when they're no longer needed. Some are variations of the tattoo-like circuits but they can also take other forms.

Silicon, it turns out, is soluble in water when it's sliced thin enough, and a sliver of silicon 35 nanometers thick will dissolve in about two weeks, Rogers said. The substrate can be made from silk, magnesium, silicon dioxide or some other material that also becomes soluble when thin enough.

The soluble circuits have less of silicon, magnesium and other minerals than are in a daily vitamin pill, so they are safe in the body, Rogers said. To illustrate his point, he produced and then ate a tiny RF oscillator 5 millimeters across.

One possible application of the soluble electronics is to help prevent infections forming at surgical sites. A device could be implanted in the wound and programmed to emit bursts of heat sufficient to kill off bacteria. Because the device dissolves, there's no need for further surgery -- and further risk of infection -- to remove it.

Soluble electronics could also be used for non-medical purposes, such as environmental monitors at a chemical spill that eventually dissolve. Or they could be used in consumer electronics to reduce hazardous waste.

Rogers received the US$500,000 Lemelson-MIT Prize in 2011 for his work in bio-electronics.