Rumoured HTC One device shown off in leaked image 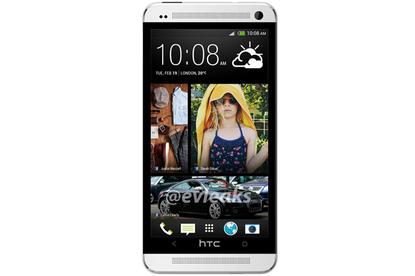 Is this the HTC One? (Image credit: @evleaks)

A press image of what appears to be HTC's latest flagship Android phone has been leaked on Twitter account @evleaks.

Previously rumoured to be called the M7, the leaked device is now being referred to as the HTC One. The evleaks Twitter account, which has a solid track record when it comes to publishing correct rumours, suggests that the handset will simply be branded "HTC One".

The leaked press image of the device shows a large device with what appears to be a strange button layout. The phone pictured has a back button on the left and a home button on the right, flanked by a rather large HTC logo. The absence of a multitasking button, a traditional feature of HTC Android phones, is striking.

The phone appears to have a two-tone colour scheme, with a black bezel surrounding the screen and a white piece on both the top and bottom edges. Both pieces could house a speaker — the company published an infographic last week suggesting it will "kick off a new sound and camera experience in 2013."

The bottom of the rumoured HTC One device does appear to look slightly angled. An angular design wouldn't be a first for the company, which used a similar design on its Legend Android phone back in 2010.

The HTC One (codenamed M7) is expected to feature a 4.7in full HD display and is likely to come with the latest version of the company's Sense user interface, version 5.0.

HTC will hold a press event in New York on Tuesday 19 February where it is expected to unveil the HTC One. The event is scheduled a few days before the Mobile World Congress (MWC) 2013 event in Barcelona, Spain.