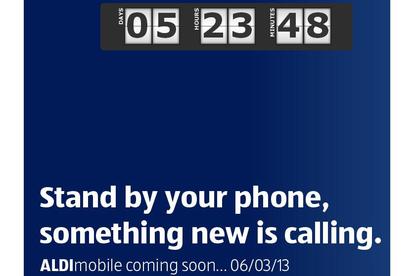 A screenshot of the Aldi Mobile website, currently showing a countdown timer that is set to end on Wednesday 6 March at 8.30am.

The blog stumbled across Aldi's latest shopping catalogue which is promoting a yet to be launched service called Aldi Mobile. The catalogue reads, "stand by your phone, something new is calling". The date of Wednesday 6 March is noted, along with the words "coming soon".

In addition to the catalogue, the Aldi Mobile website currently displays the same message. The site includes a countdown timer that ends on 6 March at 8.30am. Most Aldi supermarket stores across Australia open at this time on weekdays.

Although no details about the Aldi Mobile service have been confirmed, Ausdroid speculates that the new MVNO could use the Telstra wholesale network to provide its service. It would become just the second low-cost network in Australia to use Telstra's wholesale postpaid 3G product following the launch of Kogan Mobile late last year.

The Telstra wholesale network is capped below the regular data speeds of Next G. It covers 97 per cent of the Australian population and offers typical download speeds of between 550 kilobits per second (Kbps) and 3 megabits per second (Mbps).

Most other current, low cost MVNO's in Australia, such as Red Bull Mobile, Amaysim and Live Connected, use either the Optus or Vodafone networks.

In addition to Aldi Mobile, Aldi supermarkets will also begin selling mobile phones. It's latest catalogue advertises a dual-SIM, Onix branded feature phone for $19.99 along with a Bauhn-branded Android phone, also with dual-SIM capabilities, for $199.

The Bauhn ASP-4500Z Android phone is advertised as having a 4.5in IPS screen with a qHD resolution of 540x920, a 1GHz dual-core Cortex A9 processor, 512MB of RAM and 4GB of internal memory. It also includes a microSD card slot, a 5-megapixel camera and a 2000mAh battery and runs the 4.1 Jelly Bean version of Google's Android operating system.

PC World Australia has contacted Aldi for more information regarding both Aldi Mobile and smartphones sold by the supermarket chain and will update this article with any comments that are forthcoming.

Would you use an Aldi Mobile pre-paid service? Let us know your thoughts in the comments below!