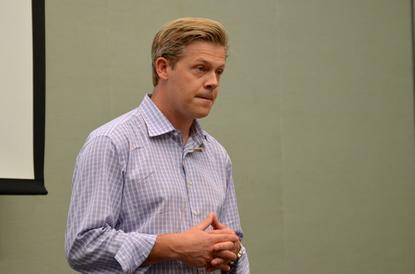 Nick Parker has one of the more interesting jobs in the PC business right now. As corporate vice president for Microsoft's OEM division, he manages the company's relationships with PC manufacturers, including sales and licensing of Windows.

It's not always an easy job. Microsoft ruffled a few feathers last year when it started selling its own Surface tablets, effectively competing with its hardware partners. And Windows 8 has taken some of the blame for the slump in the PC business, although the popularity of tablets hasn't helped.

At Computex, Microsoft is taking steps to strike back. Parker gave Microsoft's keynote at the show Wednesday and hosted the first public demonstration of Windows 8.1, an update due later this year that aims to address some of the criticisms in the first release. Microsoft also announced that Windows RT, the version of Windows 8 for ARM-based processors, will soon include the Outlook email application.

IDG caught up with Parker after his keynote and had a chance to ask him a few questions. Following is an edited transcript:

IDG: So you just announced you'll be including Outlook with the next version of Windows RT, what was the thinking behind that?

IDG: The reception for Windows RT has been a bit lukewarm, what are some of the reasons for that and to what extent will adding Outlook will improve the situation?

NP: If you look at what we did with RT -- it's completely new silicon, a new hardware platform, and Windows 8 is a new OS. So first you just have a natural growth curve when you're starting at zero. Then you start seeing new apps appear, the killer apps that people want, like Outlook. And the ecosystem gets more familiar with it -- they learn how to code to it and how to certify parts for it.

We get so used to the tremendous success we've had on PCs for years, you just think you can flip a switch and the platform's going to change. I think it's just the incremental growth of a new platform. And we should be a bit humble about how we go to market and talk about the new capabilities. I think we could maybe have inspired people a bit more with some of the RT devices and some of our marketing.

IDG: There's a lot of downward pressure on tablet pricing -- Asus showed an Android tablet this week for $129. Do you expect to see Windows 8 tablets getting down to those sort of prices?

NP: That's a question to ask our OEMs [original equipment manufacturers, or basically PC makers]. I think people are prepared to pay for value and we see tablets with higher price points having better capabilities and features. I think buyers are getting smart about what's good quality. But OEMs will choose their own prices.

IDG: We saw the first 8-inch Windows tablet launch this week from Acer. What are some of the things you're doing to provide a better Windows experience on those smaller devices?

NP: For any device you can hold in one hand, one of the things you need is portrait mode -- so, the ability for the apps to work in the same way, to move and to flow nicely. And for our OEMs, we're giving them the ability to have buttons on the side of the device, because when you're holding it in one hand you might want to push a button on the side. You have to make the OS extensible. So those are the types of things.

NP: Yes, we talked about that today.

IDG: I've never thought of Windows as being designed for smaller screens; the netbook experience wasn't particularly great. What are you doing to improve the software experience?

NP: In terms of how the display scales up and down, and in terms of the zooming capabilities -- as soon as the preview [of Windows 8.1] comes out you should play with it.

IDG: There's a tremendous variety of form factors out there right now -- all kinds of laptops and tablets and convertibles. When you look ahead a few years, do you expect them to coalesce around a few winning designs or will there always be that much variety?

NP: In terms of capabilities, I think touch is going to be the new standard. People aren't going to want to carry around hundreds of devices. You'll have a phone, and I think the phablet is an interesting space. But for two-in-one detachables -- I'm seeing the interest in those ramp. People want the best of both worlds. You can have a tablet and sit there and surf, then you plug it into a keyboard and you're off working.

IDG: Is the keyboard here to stay, or will people eventually get used to typing on touchscreens?

I think the keyboard is here to stay, you've got that physical feedback. You may see a lot of innovation around keyboards but I think they're here to stay.