$US99 Android PC maker hopes to set off industry change 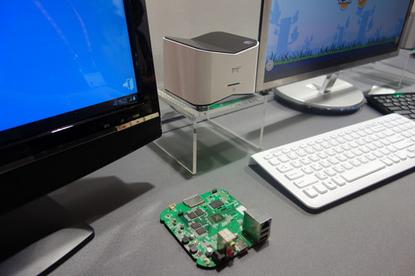 The MiiPC and the motherboard inside.

At $US99, the mini PC developed by thin-client expert Young Song is meant to be affordable. In fact, the price is so low, most consumers won't hesitate to buy one, he said.

But unlike other mini PCs that run Windows, this one comes with Google's Android OS installed, with the aim of shaking up the desktop market.

"Nobody is making an Android PC," he said, on the sidelines of the Computex show in Taipei. "But I think Android can become mainstream."

The product, called the MiiPC, comes from Song's company ZeroDesktop, a cloud services provider based in the U.S. Already, the MiiPC has gained some attention through crowdfunding website Kickstarter that brought in over $175,000 to the project.

The MiiPC, however, is targeting a niche market and built for use by children. It runs Android 4.2, features a dual-core 1.2GHz chip from Marvell Technology Group and comes in a small box-like case that can connect to a display, keyboard and mouse. Outside the typical features found on an Android device, the MiiPC also lets parents monitor and remotely control use on the PC via a smartphone or tablet. For example, a parent can check what games their child is playing and choose to shut down the program, or set time limits on access.

But while the MiiPC is marketed for children and parents, there's clearly potential for it to thrive as a standard desktop computer, Song said. "I think people also want to see Android on large screens, not just on tablets and smartphones," he said. "You can see everything better. So why not?"

Parents who use the MiiPC will see that checking email, surfing the Internet and even using office apps can be easy on the device, Song added. In addition, the MiiPC can also act as an entertainment hub and stream video to up to 10 different devices.

"Once people accept this as a key computer, then they will be willing to use it. When they need to buy another computer, maybe they will just buy another one of these," he said.

The MiiPC goes into production in July and Song expects the first 2,000 units to arrive at investors' doorsteps soon after. Subsequent units will be built with more memory and be priced at $129 for the U.S. market. Young, however, wants to license the technology to PC makers, who can mass produce the design and further bring down its costs.

"We would love to work with another OEM or ODM," Song said. "We really want to enable this kind of product."

Song's company is releasing the product as Taiwan's PC vendors are also experimenting with Android. At Computex, Asus has unveiled a device that can be converted into a tablet, laptop or desktop. In laptop or desktop mode, it can run both Android and Windows 8.

But the prospects of a full-blown Android PC succeeding in the market are low, said Dickie Chang, an analyst with IDC. Notebooks running Google's other operating system, Chrome OS, have only gained a small following and other Linux-based PC systems have struggled to take off. Windows is simply the more familiar and dominant platform, he added.

Still, the MiiPC, has potential to succeed in education markets, especially as more schools in Asia are adopting low-cost Android tablets, Chang said. "For teachers, they can very easily control the students and what content they are using," he added.

Song, however, is still hopeful his MiiPC can move beyond being only a PC for children. "The price is $99, so I think people will want to give it a try," he added.