Office Mobile is only available for iPhone, iPad users can use Office Web Apps for now, Microsoft said 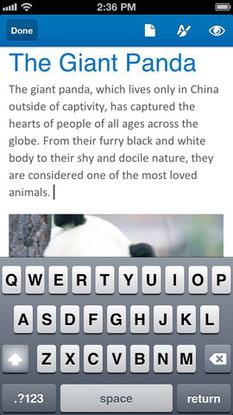 Microsoft released a version of its office suite for iPhones in the U.S. that is only available for Office 365 subscribers.

Microsoft released the Microsoft Office Mobile suite for iPhones Friday. The software is compatible with iPhone 4, 4S and 5, and the iPod Touch (5th generation) and requires iOS 6.1 or later, according to the iTunes release notes.

Mobile Office allows users to access, view and edit Microsoft Word, Microsoft Excel and Microsoft PowerPoint documents, according to the release notes. Because charts, animations and SmartArt graphics and shapes are supported, documents look like their originals, Microsoft said, adding that formatting and content remain intact when edits are made.

iPhone users can access Office documents that are stored on SkyDrive, SkyDrive Pro and Sharepoint.

"Office Mobile is cloud-connected. The documents you've recently viewed on your computer are readily available on your phone in the recent documents panel," Microsoft said. It is also possible to view and edit documents attached to email settings.

Documents can also be edited offline. Changes will be saved online when the device reconnects with the network, Microsoft said.

When opening a Word document from SkyDrive or SkyDrive Pro on an iPhone, "it automatically resumes at the place where you left off reading, even if you last viewed the document on your PC or tablet."

The app is only available in the U.S. for now. "Office Mobile for iPhone will be available in 29 languages covering 135 markets. The international rollout will occur over approximately 4-5 days," Microsoft said in a blog post.

The app is not available in an optimized version for the iPad. "Like all iPhone apps, Office Mobile can work on iPad, either small or '2X' scaled up, but you'll have a more satisfying experience using Office Web Apps," Microsoft said.

Office for iPad is reportedly scheduled for release in October 2014.

Loek is Amsterdam Correspondent and covers online privacy, intellectual property, open-source and online payment issues for the IDG News Service. Follow him on Twitter at @loekessers or email tips and comments to loek_essers@idg.com