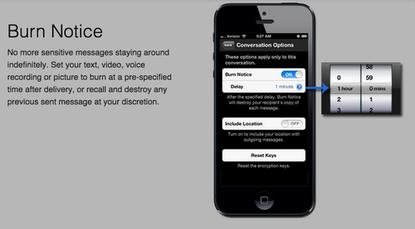 Silent Circle, a company specializing in encrypted communications, released a messaging application for Android devices on Wednesday that encrypts and securely erases messages and files.

The application, called Silent Text, lets users specify a time period for which the receiver can view a message before it is erased. It also keep the keys used to encrypt and decrypt content on the user's device, which protects the company from law enforcement requests for the keys.

The documents passed by Snowden to The Guardian and The Washington Post newspapers describe a host of programs designed to intercept email and phone metadata in a broad effort aimed at tracking national security threats. The leak also prompted a vigorous privacy debate and interest in how to better shield electronic communications from spying.

The Silent Text application generates a new encryption key for each new message. The key is then destroyed "so even if your device is examined, there are no keys to be had after the conversation is complete," according to the company's website.

Only the sender and receiver can view a message. If it was intercepted in transit, it would be unreadable unless the interloper could obtain the encryption key or use brute-force computing power to decrypt the content.

The "Burn Notice" feature lets the sender set a time for a text, video, voice recording or picture to be erased from the recipient's device. The sender can also recall or destroy previously sent messages. It supports files up to 100 MB.

Silent Text's destruction feature is similar to one included in Wickr, a secure encrypted messaging application for iOS.

Silent Circle, along with Lavabit -- an email provider believed to have been used by Snowden -- shut down their email services in early August. Lavabit's founder Ladar Levison wrote he was under pressure from the U.S. government but could not describe the legal issues.

A short time later, Silent Circle, which said it had not received any subpoenas, also opted to shut down its email service as a pre-emptive move. It said it would focus instead on real-time mobile communications, asserting that the protocols email uses make it vulnerable to snooping.