The screen's bigger, but the Note 3's largest change is in use of the S Pen stylus 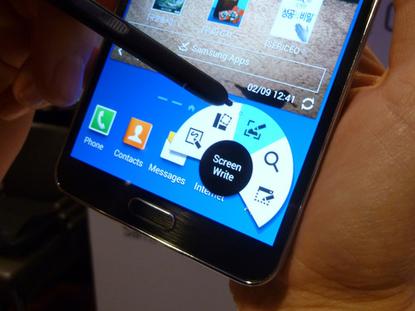 It's the IFA electronics show in Berlin so that means it's time for Samsung to launch a new Note, one of its large-screened smartphones.

The new Note 3 features a 5.7-inch full high-def screen that makes most smartphones look puny in comparison. Samsung has managed to keep the weight down and the phone is thin, but what's it like to use?

I had 10 minutes to try out the biggest new features. Here are my initial impressions.

The biggest changes surround the way the phone's stylus -- called the "S Pen" by Samsung -- can be used to interact with the software. The previous Note 2 had an S Pen, but Samsung said that many consumers either weren't using it or were only using it for navigation and tapping on-screen buttons.

To make it perhaps easier, an on-screen control panel called the Air Navigator now appears when the pen is removed from the Note 3 or when the stylus is brought near the screen and a button on the side of the stylus pressed.

It provides a quick link to the S Pen features, some of which were interesting and perhaps useful.

The most impressive among them was the handwriting recognition. I'm the type of person that often writes notes on a piece of paper and then puzzles later over what I wrote and why I wrote it. The recognition won't help with the latter problem, but it did do an excellent job of figuring out what I was writing.

Even as I scrawled words across the screen, the Note 3 did a perfect job of turning them into text. It worked well with phone numbers too and wasn't phased by the different styles of "1" and "7" used in the U.S. and Europe.

I could use handwriting in any of the places I tried where the on-screen keyboard would normally be used. As the S Pen is brought near the text box, an icon appears. Once clicked, the handwriting recognition software launches and recognizes text then passes it into the text entry box.

Another S Pen function, called Pen Window, makes use of the phone's ability to multitask and run two apps at once. Tap the Pen Window icon on the Air Navigator control panel and then draw a box anywhere on the screen.

A second window containing a number of icons for apps like YouTube, a calculator or the email software, launches into the box. Any of these apps can be then launched into the box, which floats on top of whatever is showing on-screen.

The window can be moved or minimized to become a small, circular icon that sits on top of the phone desktop and can be launched at anytime. Several Pen Windows can be run at the same time.

Whether the Air Navigator will be enough to persuade users to find more complex uses for the S Pen, and whether they actually care, remains to be seen but it does appear that this is the S Pen's best chance yet at becoming a talked-about feature of the Note series.

Perhaps the most noticeable cosmetic change between the Note 2 and 3 is the rear panel of the device. Not normally a focus for designers, Samsung has embossed the plastic case to give it a leather look. Fake stitching around the edge of the case adds to the effect which, to Samsung's credit, doesn't look too bad.

The Note 3 will be available in major markets from Sept. 25. In the U.S. it will launch in early October through major cellular carriers.