The new fiber technology could be a thin, fast connector throughout data centers, Intel says 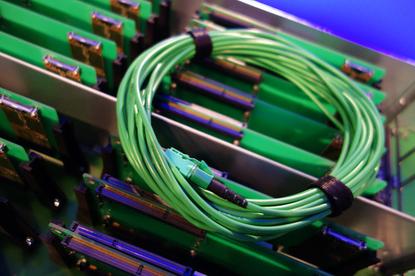 An optical interconnect introduced by Intel on Wednesday may someday slim down cabling throughout data centers if the company can get enough vendors to mass-produce it.

The interconnect, which Intel is calling MXC, is designed to offer high speed with a long reach and a relatively low cost. Intel developed MXC with Corning and showed it off at a press event in San Francisco. Its next goal is to publish the MXC specification so fiber manufacturers can start using it to develop new products, said Victor Krutul, director of business development and marketing at Intel's Silicon Photonics Operation.

MXC is protocol-agnostic and could be used for network links throughout a data center, over technologies that could include Terabit Ethernet, Krutul said. At Wednesday's event, Intel used it to connect two trays of microservers to each other in a demonstration rack. The fiber could also be used to link servers to a top-of-rack switch, connect a series of those switches to a bigger switch at the end of a row, or form the backbone of the data-center network, Krutul said.

A key application where MXC may be needed is so-called rack-level computing, where the various components found in servers are separated and packed in large numbers into rack units of their own, Krutul said. Rack-level computing needs to bring together parts distributed throughout a data center, an ideal fit for MXC's range and speed, he said.

Intel gave a few details about MXC in its description of a session at next week's Intel Developer Forum. The announcement on Wednesday came alongside other signs that the company is making another push into networking, a market where it has had mixed results. Intel also announced the Atom C2000 low-power processor line, which will come in system-on-a-chip variants for switches and routers, among other uses.

MXC can carry 25Gbps (bits per second) on each fiber over a distance of 300 meters, a combination of speed and range that today's most comparable fiber technology, VCSEL (vertical cavity surface-emitting laser), can't achieve, said Ken Chong, an Intel silicon photonics product line manager. VCSEL offers 10Gbps over 300 meters now, but at 25Gbps it can only go 100 meters or less, he said.

As many as 64 fibers can be bundled into one MXC cable, bringing its total capacity to as much as 1.6Tbps, Krutul said. That means MXC can be used for the 10Gbps connections commonly used in data centers today as well as newer 40Gbps and 100Gbps versions, up to the Terabit Ethernet that Ethernet researchers envision in the future, he said. Other protocols, such as PCI Express, could also ride over MXC fiber. MXC components convert the electronic signals at each end of a connection into optical signals, then back again at the other end.

There are longer-range fiber systems, but they use single-mode fiber, which is more expensive and harder to install than multimode fiber, which MXC uses. Cables made with this type of fiber are highly flexible and much thinner than typical copper cable. That difference can add up in a data center where hundreds of thousands of servers need to be linked together, said Chris Phillips, general manager of Windows Server and System Center program management at Microsoft. It's one of the things that has to change in data centers, he said.

Masses of cables can restrict air flow and get in the way of technicians working in the data center, making it more likely they'll knock one out of a port, Phillips said.

MXC is designed to prevent that type of accident, as well as breaks due to dust, the biggest threat to fiber in data centers, Intel's Kruzul said. The connectors Intel has developed for MXC can withstand up to 45 pounds of pull force before getting accidentally dislodged, compared with 10 or 11 pounds for current fiber connectors, Kruzul said. In addition, a "beam expander" feature built into the connector spreads out the highly focused beam of light so a piece of dust won't block the entire beam, he said.

The connector also is designed for low cost and greater reliability with just seven parts, compared with 27 parts for existing fiber connectors, he said.

Intel wants to publish the MXC specification so third-party cabling vendors can make products for it, driving volume up and costs down, Kruzul said. But the company has to work through some issues, such as intellectual property, before going ahead, he said. It may also seek to have MXC standardized in cable organizations and the Institute of Electrical and Electronics Engineers (IEEE), but those processes tend to take a long time, Kruzul said.