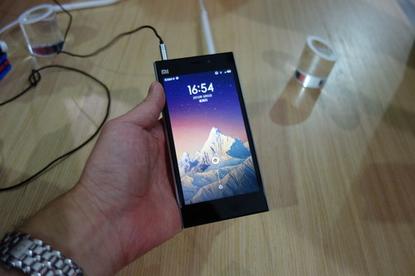 China's Xiaomi is bringing the low-price strategy that has driven its success in mobile phones to the country's smart TV arena with a new 47-inch television that it says is the most affordable on the market.

The Xiaomi TV runs the company's version of Android called MIUI, and will be sold for 2999 yuan (US$486) once it arrives in October. The TV features a quad-core processor from Qualcomm, and display panel technology from Samsung and LG, Xiaomi's CEO Lei Jun said in a product unveiling on Thursday.

"This is our position for the Xiaomi TV. We want to build the first TV our fans will use," he said.

Xiaomi also unveiled its next generation flagship phone, called the Mi3. Like its predecessor, the Mi3 has high-end specs, but comes at a low price starting at 1999 yuan. The phone features a 5-inch 1080p screen, metal casing and a 13-megapixel rear-facing camera.

One version of the phone, built for China Mobile's network, will use Nvidia's Tegra 4 quad-core processor, making it the first handset to use the chip, Nvidia's CEO Jen-Hsun Huang said at the event. The phone will launch in October.

Two other versions, meant for China Unicom and China Telecom, will arrive in November and use Snapdragon 800 quad-core chips from Qualcomm.

Xiaomi may not be well-known abroad, but the company's smartphone business has propelled it to become one of China's hottest tech companies. Millions of consumers are pre-ordering its low-price phones, and hundreds of fans routinely gather for Xiaomi product events.

The company made news last week for hiring former Google executive Hugo Barra to help lead the company's international expansion. On Thursday, Barra spoke at the company's product unveiling and said, "I believe it's time for the entire world to know about Xiaomi."

Already, demand for Xiaomi handsets is building, and in the second quarter the company's smartphone shipments surpassed Apple's, making it China's sixth largest vendor, according to research firm Canalys.

China has become the world's largest market for smartphones, but smart TVs are also growing in popularity in the country. This year, smart TV sales are expected to reach over 16 million units, up 145 percent year-over-year, according to Beijing-based research firm Analysys International. Search giant Baidu and PC maker Lenovo have also entered the market.

In designing its smart TV, Xiaomi wanted to make the device more accessible and easier to use than competing products, Xiaomi's CEO said. The device comes with a remote that has fewer buttons, and along with the ability to stream online video, the TV also features games and can download and install apps.

Twenty-two-year-old Liu Yun Jie was at Thursday's event and said he was impressed by the TV's features and low price. But he was doubtful Xiaomi fans would clamor to buy the product in the same way they have gone for the company's phones.

"It's even cheaper than the other smart TVs, but I don't think people will want to immediately buy it if they already own a TV," he said. "Only people who are in the market for a TV will probably buy it."

Xiaomi products are only available in China and Taiwan. But the company is considering entering five other foreign markets next year.