Panasonic's $5,900 4K tablet looks great but will only have two hours of battery life

The tablet will start shipping in November 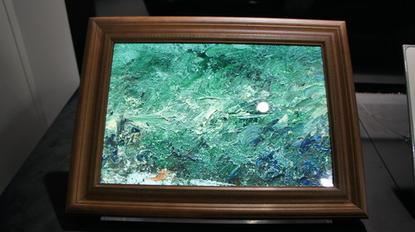 Ultra High-Definition, or 4K, is one of the big trends at this year's IFA consumer electronics show in Berlin, with video cameras and smartphones that can shoot content and TVs and projectors to view it on. Amid all the 4K products, the Toughpad 4K UT-MB5, a prototype of which was shown at International CES in January, is a standout.

The finished product runs Windows 8.1 and is powered by a 1.9GHz Intel Core i5 processor. It weighs 2.35 kilograms and is 12.5 millimeters thick. It offers 256GB of SSD storage and up to 8GB RAM.

However, looking at the screen on one of the units in Panasonic's booth at IFA, there definitely does not appear to be any lack of pixels. Just like other 4K screens demoed under the controlled circumstances at the show, it looks great. The weight is a drawback, and means the tablet can't be held for extended periods. It will only have a two-hour battery life, so users always need to have a charger close by.

The Toughpad 4K also comes with a Electronic Touch Pen, which allows users to sketch and write on the screen. The pen uses infrared signals to record users' input, according to Panasonic. Panasonic is also offering a cradle for the device, so it can be propped up and used like a desktop PC.

The Toughpad 4K was designed with sales, marketing and media professionals in mind. Panasonic is also working on a souped-up Performance model, which will be a good fit for 3D modeling and CAD applications. That device will be available during the first half of 2014.

The Toughpad 4K UT-MB5 Standard will start shipping in Europe in November. The availability and pricing of the Performance model will be announced at a later date, Panasonic said.