A man is held to the ground, accused of stealing from an IFA exhibitor 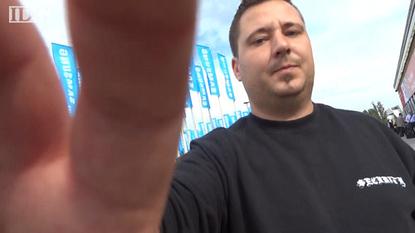 A screen capture from IDG News Service reporter Nick Barber's video camera as he was told by Messe Berlin staff not to film the event outside of Samsung's hall.

With millions of dollars of gadgets on display, the temptation to steal from some of the world's largest electronics trade shows can prove too strong for some.

On Sunday afternoon outside of the IFA consumer electronics show in Berlin, IDG reporters witnessed a man held to the ground by security staff for allegedly stealing from one of the show's exhibitors. No details were immediately available, but the incident happened just outside Samsung's hall and Samsung representatives were present in the area.

The man was shouting loudly and the spectacle had attracted a small crowd of show goers. When an IDG reporter attempted to film the scene, he was physically blocked by a security guard who at one point pushed his camera. Shortly after the event Messe Berlin apologized for the actions of the security guard.

See video of the incident in a video on YouTube.

The issue of theft from trade shows is not usually something the organizers like to highlight, but it appears to be an annoying problem at some major electronics events.

At CES in Las Vegas this year, several vendors who rented space on the show floor said they had been victims of crime during the show. Most common was petty theft although one company said its booth had been broken into overnight.

Las Vegas police didn't have any hard data on thefts from the event, which sits alongside IFA as one of the world's biggest consumer electronics events. The Las Vegas Police Department said most thefts go unreported to them.